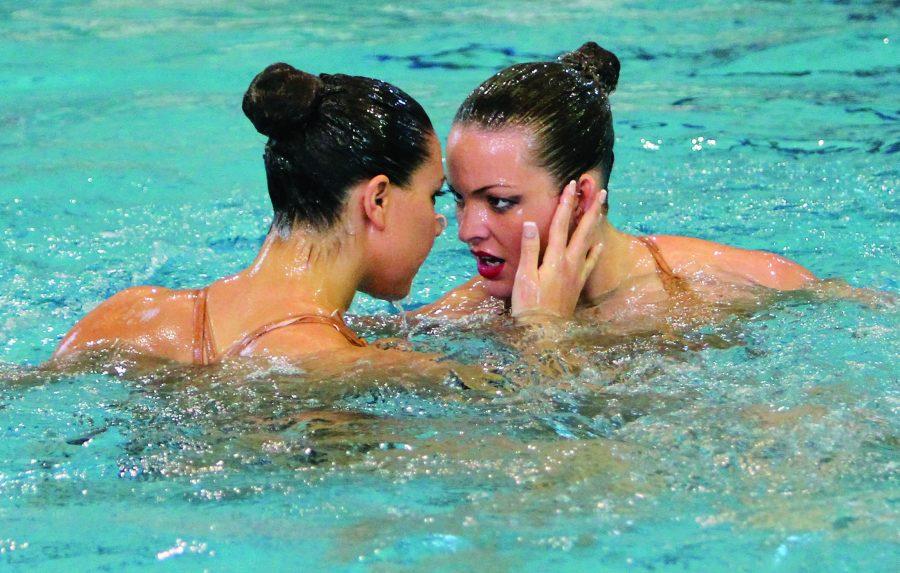 This season was a monumental for Lindenwood, with the national titles in the solo and duet routines allowing for them to go undefeated in the season, a first for the program. Sophomore Mary Killman won her third straight National Title in the solo competition. She was also a part of all four of Lindenwood’s gold medals.

For Senior Anouk Eman, it was the best way to end her collegiate career. “I am very grateful to have been part of this unforgettable experience as a senior. There was really no other way that would have made my last year more perfect and memorable! It was the best way to finish my college career!”

Eman and Killman teamed up in the duet tech competition, where they swam for the first time ever in a competition. They put together a routine that scored an 83.9653, good enough for the gold medal.

Killman rejoined her usual swimming partner in the duet free event, Reem Abdalazem, where they were able to score an 87.1000, earning Lindenwood another gold medal. Killman had an overall combined total of 173.0262 points which was more than eight and a half points better than her next competitor, giving her the gold medal in the solo event.

Teammate Daniela Garmendia was eight overall with a total of 153.1482 points.

Eman reflected on her final season at LU. “The season was very challenging because at the beginning of the season our coach set high standards to win the National Title, which of course means us making history. Most of our practices are at 5:15 a.m.” She also had this to say about the season. “Many struggles for our team in general is the fact that we do not have a pool on campus. The hours are not flexible to train whenever we want. So our pool hours are very limited, which could affect a team sport like Synchro but this did not stop us, our solution to this was waking up every morning at 4:30 a.m. to get our practices in because we knew we had hard competition.”

The National Championships saw more than 350 swimmers compete, competing from 41 teams from all over the US. Swimmers advanced to the event through various qualifying measures, including top placements at zone championships, past national championships, and other qualifying scores. Medals were awarded for both the technical routine and the free aggregate final, a combination of the technical and free routines.

It was a tremendous team effort throughout the season, and proved to be worth it in the end.