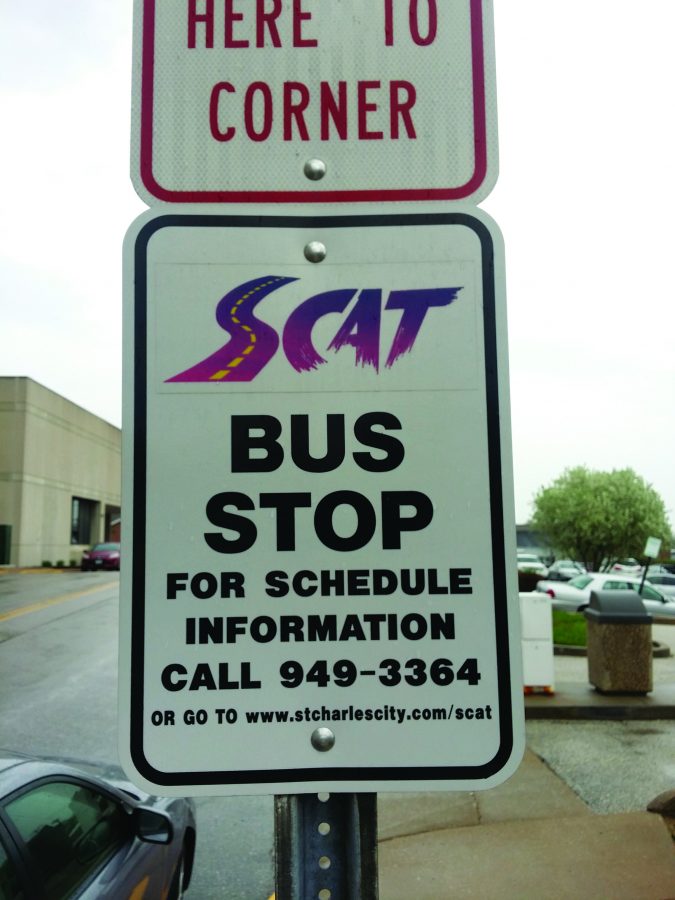 Senior Marie Hart remembers coming to Lindenwood in 2010 and having difficulty around as an international student. While a car would have been beneficial, it was not a necessity. Often times, the transportation was so inconvenient with her schedule, Hart chose to find her own way around. “If I had to go to Wal-Mart or something I usually walked or whenever friends were going with cars they would ask if I wanted a ride.” Hart says not much has changed in four years. “We only really knew there was a bus service around called SCAT and thats about it.”

While SCAT can be of some help to students trying to get around, it still has its flaws. “When SCAT actually started going around Lindenwood, it was still very inconvenient because their times stop running early in the evening,” Hart said. “So when I was done with classes I couldn’t even go grocery shopping or anything because it was already done running for the day.”

Currently, SCAT routes runs through campus from 9:00 a.m., until just before 4:00 p.m. For Hart, the need for a car finally came about in 2013 after receiving an internship with KMOV, a station located in St. Louis. Timing of SCAT was again a problem.

According to Chris Duggan, public relations coordinator, Lindenwood has tried using shuttle services in the past with little success. “The biggest one was an attempt three or four years ago to establish a shuttle around campus,” Duggan said. “There was a ton of space behind the Hyland and two shuttles would depart from there. “There was just not enough use to justify the existence of the shuttles.”

While transportation around the area is a concern, Jeff Harris, associate director for the office of international students and scholars, says that students have options when first coming to campus. Lindenwood partners with an organization called International Students Incorporated (ISI).

They recently created a Lindenwood organization on campus, International Student Fellowship. Harris says the organization is mainly in place to help students when coming back into town after breaks. “If a student contacts them a couple of weeks in advance before arriving, they’ll provide shuttle transportation from the airport,” Harris said. “If they arrive early, a lot of times if they have the ability, they can put them with a host family instead of staying in a hotel.”

Harris also says that Lindenwood does not cover transportation costs when students have to travel to cities like Chicago to straighten out immigration status issues. However, students use the International Student Office to help find the best transportation options.

So in reality, the biggest concern for international students especially is getting around campus and the St. Charles area. One student recognized this need and did something about it.

Senior Nabil Elmachit is the creator of the Facebook page “LU Marketplace”, something he started to combat high prices for textbooks at the book exchange. Later on, Elmachit recognized the same need for people looking for rides and created another Facebook page, “LU Ride!” The page currently has more than 500 members, and Elmachit says, like other forms of transportation, the page has its flaws as well. “A lot of people say I would go to the mall, but I would not take a stranger,” Elmachit said. “When I created the page, I didn’t really think that far ahead. It is totally understandable and makes sense.”

Elmachit says that while finding rides early on in his time at Lindenwood was difficult, he’s in a position now where many options are available. “Personally, I’m alright and can survive without getting a car,” Elmachit said. “I’ve been here for three years, so I think by now I know enough people and also my neighbor is one of my best friends and he lets me take his car basically any time he doesn’t need it. Basically, you learn pretty quickly the best ways to get around, and make friends with people that can help you.”

It all boils down to personal situations. Students who receive internships may be forced to buy a car. Then again, a student who grew up in St. Charles would have the need as well in the same situation. Others who don’t have much need outside of occasional trips to the store can get by finding rides through friends or social media sites. While added transportation for students would undoubtably be beneficial, it seems like Lindenwood students are doing a fine job handling the issue themselves.