Leaving Behind a Legacy: the death of Dr. Maya Angelou 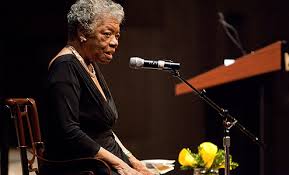 Dr. Maya Angelou, an American author and poet recognized by many people around the world, died last week on May 28 at the age of 86 in Winston-Salem, North Carolina. She was the author of three books and essays, seven autobiographies and several books on poetry. One of her most famous works was the autobiography “I Know Why the Caged Bird Sings” published in 1970. Now, the list of her published verse, non-fiction and fiction works includes more than 30 bestselling titles.

Dr. Angelou was recognized for her work, but was also recognized as an extraordinary woman who touched the hearts of thousands of people around the world. Besides being a writer, she was also a ballerina, actress and the first African American filmmaker of Hollywood. She is known for her work defending civil rights of African Americans and women.

Oprah Winfrey was one of the many people who shared her thoughts about Maya through social media.

“I’ve been blessed to have Maya Angelou as my mentor, mother/sister and friend since my 20’s. She was there for me always, guiding me through some of the most important years of my life,” Winfrey posted on her Instagram account last week.

To show how influential she was, and continues to be, the posts on social media included a number of quotes by Dr. Angelou.

Dr. Angelou was born on April 4, 1928 in St. Louis, MO. She had a tragic childhood and went through many struggles, including being raped by her mother’s boyfriend when she was seven-years-old. This tragedy was one of the reasons she started to write. The misfortunes Dr. Angelou faced throughout her life is what made her writing, and other works, so powerful and influential. She has received over 50 honorary degrees and is Reynolds Professor of American Studies at Wake Forest University.

According to her website, “Dr. Angelou’s words and actions continue to stir our souls, energize our bodies, liberate our minds and heal our hearts.”