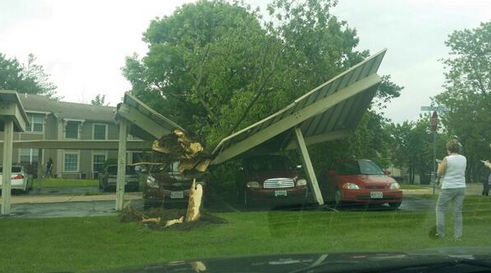 The tornado warning urged Lindenwood students to stay alert and cautious on Saturday, June 7. After a rainy day in St. Charles, students were warned by several rave alerts by the university saying to take cover. After 4:45 p.m. the warning ended. The National Weather Service rated the tornado the weakest possible rating.

According to the St. Louis Post Dispatch, there were two tornadoes confirmed that went through areas of St. Louis on Saturday afternoon and evening. There were homes and business damaged, however, there were no serious injuries reported.

The National Weather Service confirmed that the tornado touched down in St. Peters at 3: 55 p.m. near Jungermann Road and Highway 94, causing damages to a complex of apartments and another couple of businesses around that area.

Lindenwood student Courtney Mosley said, “ I was at work close to St. Peters, that is the closest I have ever been to a tornado.”

Dan Robinson, Storm Chaser and photographer, describes yesterdays situation in his website, “I caught the first tornado at the intersection of Interstate 370 and Earth City Expressway east of St. Charles. The wall cloud was wound up tight and produced intermittent vortices on the ground as it approached from the south. The tornado hit an area of industrial warehouses south of 370 with debris flying, then crossed the highway and eventually became fully condensed for a brief time. A Southwest Airlines 737 jetliner on approach to Lambert Airport passed directly through the tornado circulation, with the aircraft visibly rolling to the left briefly.”