Youth Football Camp is a success 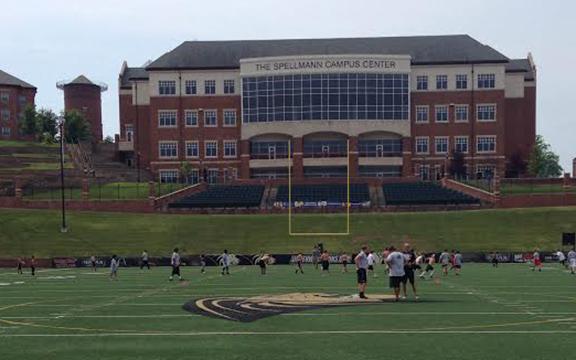 The Lindenwood University football program put on its annual youth football camp this past week, July 21-23. The camp was open to all 3rd-8th graders in the St. Louis metropolitan area and had a turn out of about 50 kids.

The Lindenwood football coaching staff, the strength and conditioning staff and several Lindenwood football players worked the camp and provided campers with top-notch position specific coaching. Each day of camp featured position specific drill work on offense and defense for the campers, as well as a simulated competitive scrimmage coined “speedball” at the end of the day. The final day of camp featured special teams drill work and a speedball tournament. Each day of camp lasted for a total of three hours.

One of the camp’s volunteers, Lions’ wide receiver Jordan Gater, weighed in on working the camp during the week.

“I love coming out here every year and working this camp with the kids. It’s a ton of fun and I really enjoy giving back to the game of football and investing in the next generation of young football players.”

Senior running back Anthony Cade also expressed how much fun he had helping out with the camp.

“I’m not sure who had more fun, the kids or me. I really enjoy being able to be out here and teach kids about the game that I love so much.”

The dates for next summer’s youth camp have yet to be announced.