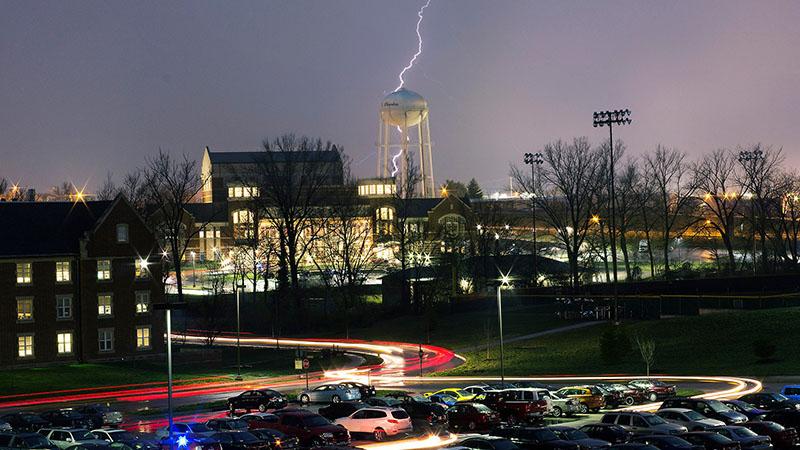 A cyclist was struck by lightning today near the Verizon Wireless Amphitheater in Maryland Heights, Missouri.

Lindenwood sophomore Roy White, who was working at the Amphitheater, was on scene.

“I didn’t see the person get hit [by the lightning],” said White. “All I remember is the entire parking lot being lit up and being deafened by the thunder, then hearing the squeal of brakes and hearing people scream someone had been hit by lightning.”

According to White, emergency help arrived in moments and started cardiopulmonary resuscitation (CPR) on the unresponsive individual.

On August 28, 2014, KISS and Def Leppard were scheduled to perform at the Verizon Wireless Amphitheater, about five minutes east of Lindenwood. Around five o’clock in the evening, a small, but violent thunder storm struck in St. Charles County and St. Louis County. I am an employee of St. Louis Parking, who works in the lot of Verizon. The lot began to flood and about ten minutes after the storm hit, there was a deafening explosion. Lightning had struck. Within a minute, Pattonville Fire District responders were all over Maryland Heights Expressway in front of the amphitheater.

According to the St. Louis Post-Dispatch, Joseph Adams was riding his bicycle home from his workplace in Riverport when a lightning bolt suddenly struck him in the head. Adams, who is 51 years old, went into cardiac arrest but Pattonville paramedics were able to revive him. There is a wound on his foot so it is believed that his foot was where the lightning exited his body. Adams is currently in critical condition at SSM DePaul Hospital in Bridgeton, Missouri.