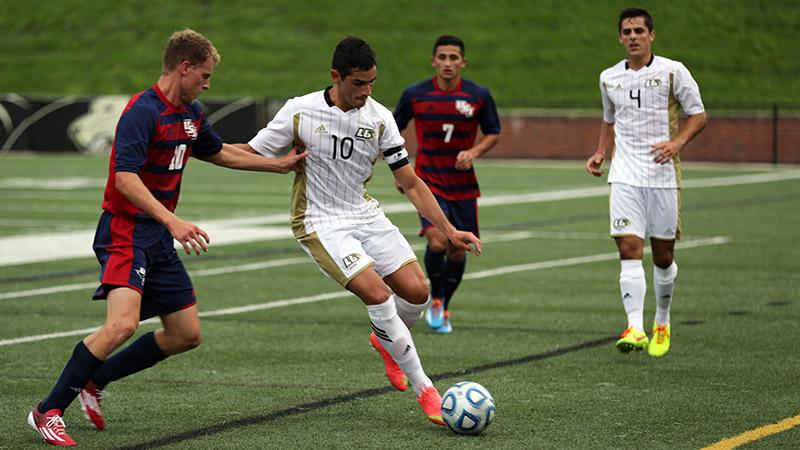 Although the Lions were able to control the match, they were unable to create goal-scoring opportunities.

In their last preseason game, the Lions lost against University of Southern Indiana, which finished last season with a record of 7-7-3, with a result of 2-0. Head Coach Carl Hutter offered every player some playing time in order to find the optimal starting team for the season kick-off against University of Missouri-St. Louis on Sept. 6.
We have to improve the way to attack and get forward. Although we did a lot of good things, we must be more aggressive” Carlos del Cumpa
LU dominated the game during the first 45 minutes without breaking through. Forward Andre Hayne had perhaps the best opportunity to score. He banged the bar with a magnificent long-distance shot in the 41st minute of the game.

After half-time, the Lions seemed to be more reserved while holding around 60 % of the possession. Although LU still controlled the match, University of Southern Indiana scored the first goal in the 56th minute through Shane Shelton. While exchanging many players in order to give all players some play time the Lions tried to tie the game without creating a dangerous chance.
We just need to work on our strength a little bit more. Since we have so many new players, we have to figure out how to work better together. We are a very talented group with many talented players. We are a great team” Nabil El Machit
However, Southern Indiana kept having chances to score a second goal through counterattacks. In the 75th minute LU defender Jeremy Tutas fouled Brian Fischer. The effect was a penalty which was used by Colton Tanner to score the second goal for University of Southern Indiana. Afterwards, LU tried to attack and get forward but instead of a shot by David Moore in the 78th minute, Lions were unable to create goal-scoring chances.

Goalkeeper: Jonathan Newkirk
Defenders: Lukas Martinen, Juan Linan Delage, Alejandro Casas da Silva, Jeremy Tutas.
Midfielders: Carlos Scheck, Steven Hutchinson, Ignacio Pizarro Romero.
Wings: Mihajlo Petrovic, Alfredo Paez.
Forward: Andre Hayne
Everybody got some playing time except for one of our goalkeepers. They got a better connection and they’ll find a nice way to win games. We’ve just been together for a couple of weeks and we had some good moments tonight. One guy lost an individual battle and that’s why they scored one goal. We have to make sure that we’ll win our battles 1-on-1″ Head Coach Carl Hutter