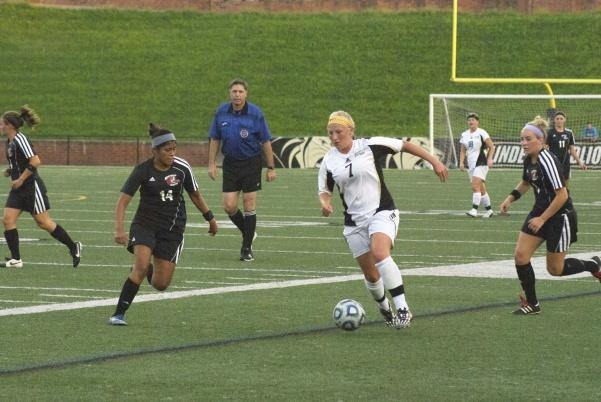 After a defensive standoff, neither team walked away with a victory at the LU women’s soccer season opener.

Facing the Maryville Saints Thursday evening at Hunter Stadium, LU’s offense dominated in the first half, tallying four shots on goal. The Lions missed several opportunities, including a header by forward Taylor Wade, which was narrowly saved by Maryville keeper Bailey Doerflinger. The home team’s defense also lent a hand by protecting the net and not allowing for a single shot on goal in the half.

Throughout the second half, both teams played evenly as they looked to break the tie. Maryville was the first to go on the attack as they took four shots on goal within the first ten minutes of the half, none of which were able to get past LU keeper Melissa Weiss

The Lions had several opportunities to get on the scoreboard in the second half, including a Kat Roe shot that struck the crossbar. None of these attempts made it into the back of the net. At the end of 90 minutes of play, the game was sent into overtime with a scoreless tie.

The two ten minutes periods of overtime brought more of the same, as both team’s defenses and the keepers stood tall as the game came to a close. When the final horn sounded, the game ended in a scoreless draw.

After the game, Roe emphasized that even though the Lions were unable walk away with a win there were many

positives to take from the game.

“After playing 110 minutes, coming out with a 0-0 tie is frustrating, but we did a lot of great things and created a lot of scoring opportunities, it just didn’t go our way,” Roe said. “I think we will take this game and continue to work on the little things so we can be even better as the season goes on.”

Head coach Laurie Kaminski was pleased with the play of her team, but looks to make some adjustments as they look towards the remained of the season.

“We need to be a more confident and clam in our finishing ability,” Kaminski said. “We had several shots on goal we just need to focus on placement over power.”

Starting the season with a shutout, the Lions look to carry their defensive momentum to UMSL as they take on the Tritons this Sunday.