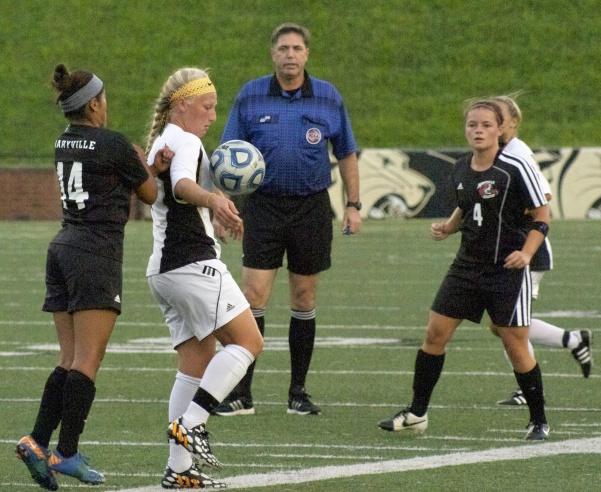 Kat Roe (7) controls the ball in a match against Maryville

Falling 3-1 to the UMSL Tritons, the women’s soccer team not only lost the game, but also one of the key components to their offensive attack.

Kat Roe, sophomore midfielder, was injured during the Sept. 7 outing and was forced to spend a good portion of the game on the sidelines. Doctors later determined that she had broken her foot and will miss the remainder of the 2014 season. Roe is scheduled to have surgery early next week.

While losing a player is never easy, head coach Laurie Kaminski knows that it is part of the game and that there still is a long season ahead of her team.

“Kat is a valuable member of our team and losing her will be an adjustment, but now she will contribute in a little different role than expected.” Kaminski said.

In 2013, as a true freshman, Roe was the lead scorer for the team, tallying seven goals. Two of these goals were game-winners in the Lion’s 8-10 overall record. She started in 17 of the 18 games, emerging as a key offensive component. Having at least one shot per game in 17 games, she also led the team with 58 shots and 29 shots on goal.

Despite the unfortunate turn of events, the Lions’ coach remains optimistic with more games quickly approaching.

In the first game without Roe the Lions were able to capture a 2-1 overtime win Tuesday night against Missouri S&T. With a record of 1-1-1, they will travel to Kirksville, Missouri to face Truman State on Sept. 16.