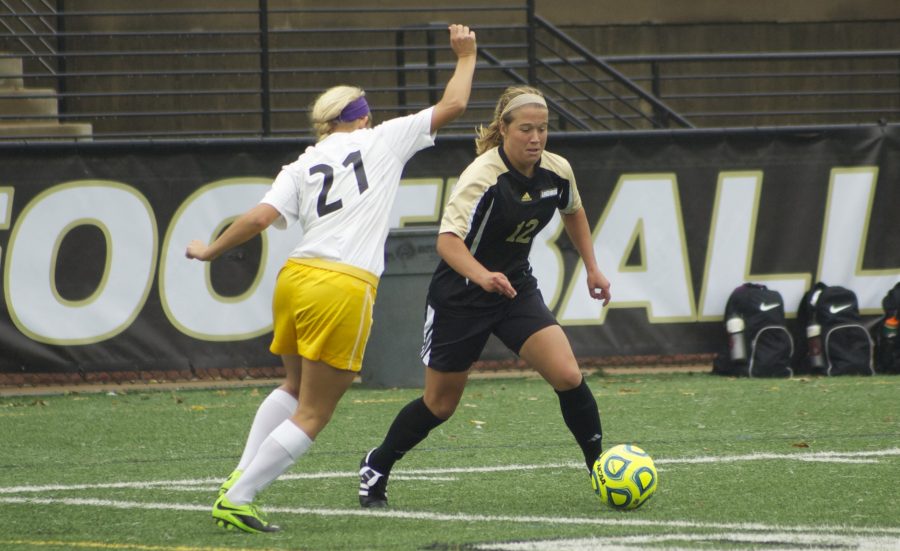 Kristin Brewer faces a MSSU defender in a game on Oct. 12.

In a high stakes conference match up, Kristin Brewer scored the game-winning goal for the women’s soccer team in in the second overtime, Friday against Northeastern State.

After settling for a scoreless tie on Oct. 12, against Missouri Southern State University, the Lions spent an entire week working to turn scoring opportunities into goals.

Struggling to put points on the board in the past few games the team stepped on to the field eager to show that they are still a threat as tournament play draws near.

The game started off slow as both teams struggled to fall into a rhythm on offense and even make a true attack on the goal. It was not until 29 minutes into the game that the Riverhawks first reached the scoreboard as Anastasia Robinson put her team in the lead. Off a long cross from her teammate Chelsea Martin, Robinson was able to connect for a goal-scoring header.

Playing from behind the Lions searched for a spark to ignite the offense, but was only able to put up one shot on goal in the closing minutes of the half. Danielle Torry’s shot for LU was he only shot NSU goalie Jordan Woodruff stepped in front of as her team sat with a 1-0 lead at halftime.

Determined to come back and capture the win, the Lions turned up the pressure on offense, making several runs on goal.

The equalizer for LU came in the 53rd minute off the foot of Molly White. Off a cross by Torry, White was able to send a shot over the Woodruff’s head, finding the back of the net for the second time this season.

Northeastern State quickly answered, beating LU goalie Melissa Weiss on a low shot from six yards out. Melissa Giles was credited with the goal, which was her fifth of the season.

Becky Roberts would keep LU’s hopes alive as she headed a corner kick by Christie Byrne towards the NSU goal. While Woodruff made the save, she was unable to maintain possession and Roberts quickly sent the rebound from her own shot to the back of the net.

While each team put up several shots in an effort to close out regulation play on top, the game was sent into overtime with the score tied at 2-2

Remaining tied through the first overtime period, the Lions would finally catch a long overdue break in the opening minutes of the second overtime.

Taking advantage of another corner kick save Woodruff failed to hang on to, Kristin Brewer was able to send the rebound past the goalie to capture the golden goal and earn the win for the Lions. Her team now moves to 5-5-3 and improves to 4-3-2 in conference play.

LU will play the last game of the Oklahoma road trip on Sunday when they face University of Central Oklahoma. The Bronchos hold a record of 8-3-2 and are currently in third place in the conference.