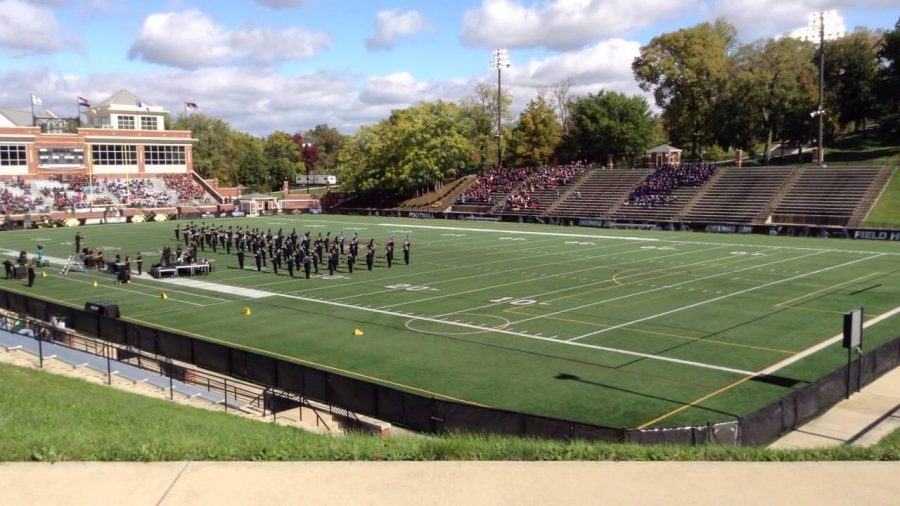 The contest began with a preliminary round in which each band was critiqued by a panel of judges in several different categories. The bands were divided into three divisions, which were named after individuals that had contributed to the festival in past years and who had left a mark on music in the state of Missouri.

Lindenwood band members and fine arts students volunteered at the event with jobs including selling tickets, working concessions and leading bands on and off the field.

“I think it was a good idea for Lindenwood to host the competition because it puts us on the map for high schoolers,” said Sophomore Rachel Schuldt, a member of LU’s front ensemble.

At the conclusion of the competition’s preliminary round, LU’s Lion Pride Marching Band preformed their show, “Conversations in Creativity,” which they had been preparing since August.

As the Lions stepped off the field, the award ceremony began, rewarding the bands that placed highest in categories such as music, visuals and general effect. Each band’s overall score was also calculated and the top seven moved on to compete once more in a final round.

Schuldt’s former high school was among the seven bands that scored high enough to earn a spot in the finals. She could not help but feel a sense of nostalgia as she watched the band she once played in take the field.

“I was sad because I knew I wasn’t a part of them anymore, but happy to see them doing so well,” Schuldt said. “I’m fairly proud of how well they performed.”

After a two hour intermission, the bands returned to the stadium to replay their performances as an opportunity to make adjustments in hopes of improving their scores.