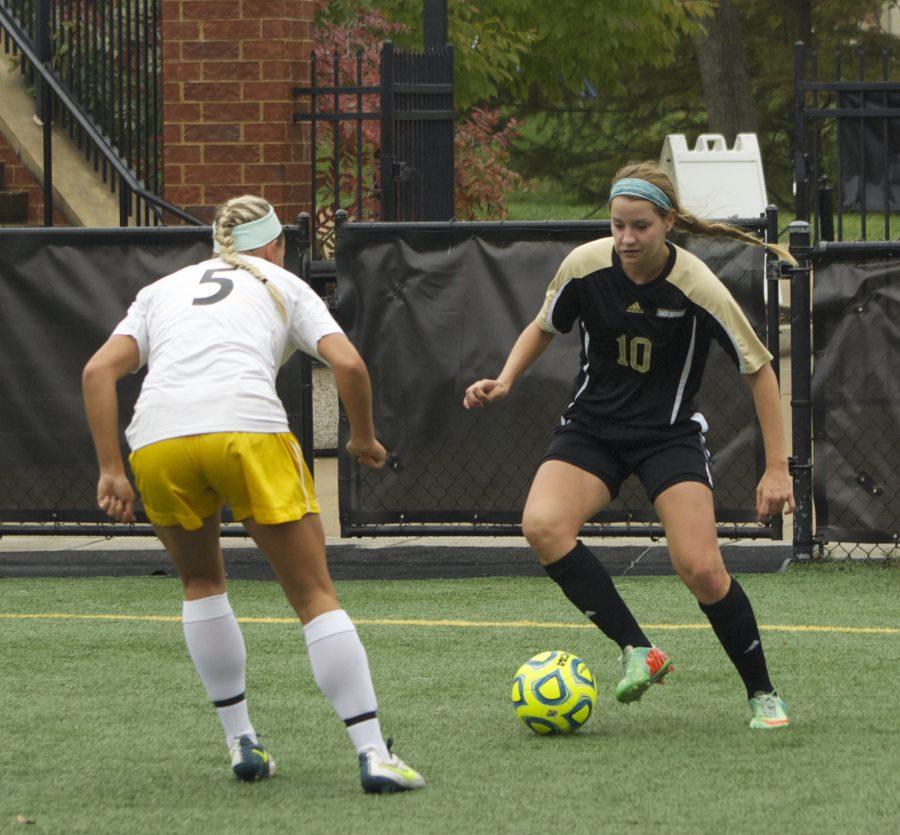 Becky Roberts (10) faces a Missouri Western defender in a game earlier this season.

The women’s soccer team’s woes continued as they fell to Missouri Western State in overtime on Sunday afternoon.

Playing a fourth consecutive away game, the Lions looked to make the most of the trip, as they headed to St. Joseph, Missouri to face the Griffons. Coming off a much needed win over Northwest Missouri State on Friday, extending a winning streak was on the minds of the team as the season’s end draws near.

Getting off to a quick start, Becky Roberts was the first to strike as she put the Lions in the lead just over nine minutes into the game. Taking advantage of a deflected pass, Roberts took a quick shot from just outside the box, recording her seventh goal of the season. Kirsten Crabtree was credited with the assist, her first of the season.

Missouri Western spent the rest of the half attempting to reach the net, but was held off by the defense of the Lions. LU goalie, Melissa Weiss only faced two shots and easily saved both. The impressive stand by the visitors sent them into halftime still holding a 1-0 lead.

While the Lions continued to keep the Griffons in check, the equalizer finally found its way into the back of the net in the 68th minute. On a long shot, Ashlyn Powers sent a shot past LU goalie Lauren Groathouse, who replaced Weiss at the beginning of the half.

Tied at one apiece, the game quickly turned into a back-and-forth battle as each team struggled to create opportunities on offense. In the remaining 22 minutes, the only shot by either team came off the foot of MWS’s Sydney Andrews. As Groathouse made the save, the game was sent into overtime.

In the opening minutes of OT the Lions were called for two fouls, which served to be a vital mistake. Awarded a free kick, Andrews faced Groathouse yet again, but this time she delivered the dagger in the 96th minute.

This game marks the Lions’ seventh trip to overtime this season. The team has gone 2-2-3 in extra time. They have now dropped to sixth place in the conference with an overall of 6-7-3.

Playing in the final road game of the season, LU will travel to Warrensburg, Missouri to face the University of Central Missouri on Friday. The Mules are undefeated this season and currently sit at the top of the MIAA conference.