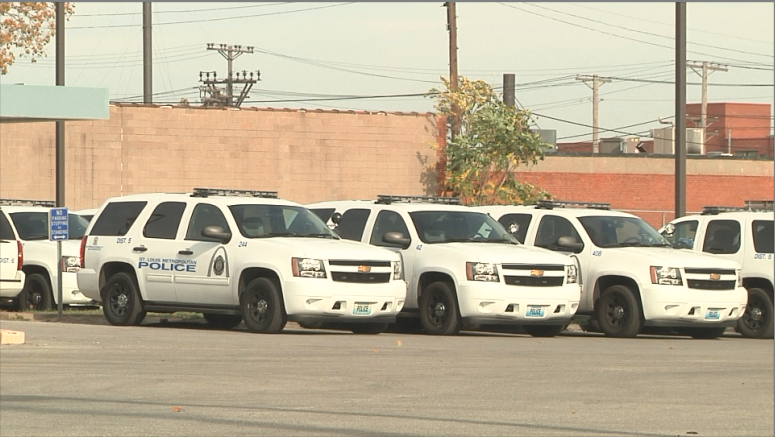 Senior Isis Wadleigh and junior Nicola Muscroft described their almost two-hour long ordeal at the department as traumatic. Muscroft and Wadleigh said they arrived at the station around 2:30 p.m. to try to get an interview with police chief Sam Dotson on the recent band equipment thefts that had been occurring in the St. Louis area.

The students went inside to speak with the receptionist through a glass window and a telephone. They asked to speak with Dotson, but he was at the police headquarters on Olive Street in downtown St. Louis.

The receptionist gave them the address and the students exited the building, planning to pay the chief a visit.

The students didn’t know that they would be ambushed by police and have their privacy invaded.

Before leaving the location, Muscroft thought it would be a good idea to get some footage, or b-roll, of the police vehicles for a news segment on LUTV, but prior to taking out the camera equipment she wanted to get permission.

Only a few feet away from where Muscroft and Wadleigh were, an officer was sitting in a police SUV. Muscroft asked if they could get some footage of the police vehicles.

The officer told them that it was okay as long as they remained on the sidewalk. The students got out the camera equipment, shot their footage and packed up.

When the students got in their car and attempted to pull out of the parking lot, they were blocked by two police officers in an SUV.

The officer in the passenger seat got out of the SUV and approached the Mini Cooper, owned by Wadleigh, and signaled for them to roll down the window. Wadleigh complied and the officer told the students to place their phones and GPS on the dashboard. Then the officer told Wadleigh to turn off her car.

By this time the other officer was out of the SUV and was standing on the passenger side. The officer told the students to step out of the car and walk to the back of it.

While Muscroft’s hands were spread apart on the car, Wadleigh was told to have her back facing the car and sit on the bumper.

There were approximately 15 additional officers that had the students and car surrounded.

The students said they felt intimidated by the police presence. The women were then ordered to give a full explanation as to why they had been at the police department.

The officers asked them for their ID’s and social security numbers, about members of their families and asked if they could search through their personal belongings. Wadleigh and Muscroft were then told that they would have to wait for the police department’s Intel and be investigated by the detective.

One officer asked to see what they had filmed while another said what the students called inappropriate things.

The students heard remarks from officers such as “things could be much worse,” and “If it were night time, we would have all surrounded you with our rifles.”

Other officers goofed around, laughing and sharing stories of people that they shot, which the students said seemed highly inappropriate

When the students arrived back at LU, they shared what had happened to them with their professor, Jill Falk, and other LU faculty members.

A meeting was held Wednesday with Dean of Communications Mike Wall, then another Thursday with LU’s In-house Counsel Eric Stuhler and President James Evans.

Stuhler has informed other media outlets and has written a formal complaint to the police department. The complaint, sent on behalf of Evans and Stuhler, noted recent tension between the press and law enforcement.

“Despite this tension, what happened to these student reporters in this incident is unacceptable,” reads the letter.

The letter went on to say the university will be working with the Student Press Law Center to continue the dialogue about student journalists’ rights. The university requested that Dotson make an inquiry into the officers’ behavior and that an apology be written to the students.

The letter was sent by mail on Friday and it was and carbon copied St. Louis Mayor Francis Slay and Missouri Attorney General Chris Koster.

“The Department will investigate the allegations made by the students,” according to a statement from spokeswoman Schron Jackson. “We respect their First Amendment rights and regret any discomfort they may have experienced.”