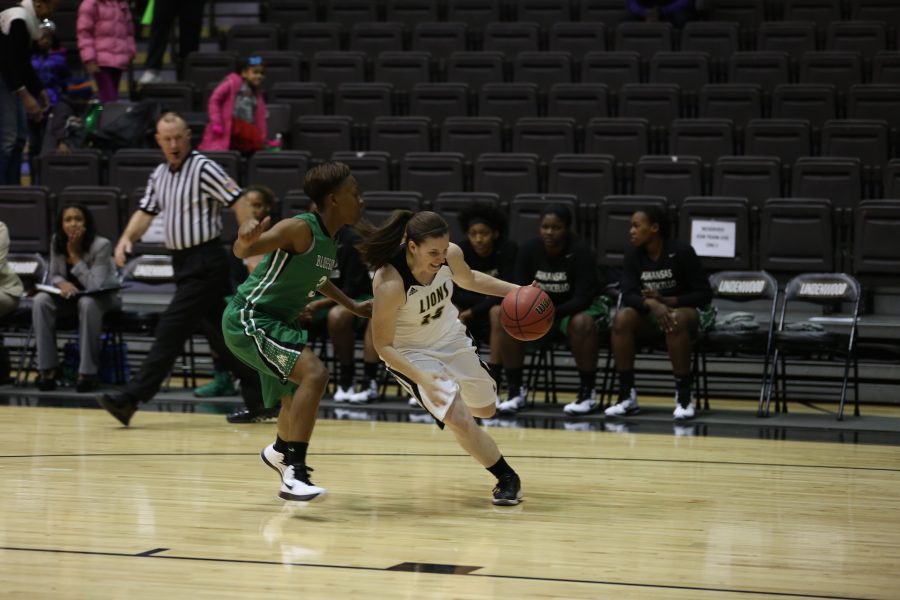 Bri Wilber drives the ball against an opponent in a game earlier this season.

The women’s basketball team continued to play strong basketball on Saturday afternoon, as they took down Lane College, 82-65, in the second game of the FCA & Zaxby’s Tip-Off Classic.

Scoring 42 points in the first half while keeping their opponents to just 24 points, the Lions played some excellent defense while their offense continued to roll.

Eight different Lions scored in the first half, as Jennie Rocha and Kylie Ferguson led the team with 9 points before the break.

The second half was a scoring frenzy, as it seemed like neither team could miss. Lane College put up 41 points while the Lions put up 40 points in the final 20 minutes.

Held to just 4 points yesterday, Kassidy Gengenbacher looked like her usual self as she put up 12 points in the second half, giving her 16 points on the day.

The Lions continued to show how deep their bench is, as they got 28 points off the bench, while their dominance down low continued, scoring 40 points in the paint.

Rocha added 15 points and seven assists on the day for the Lions, playing a team-high 30 minutes.

The Lions improve to a perfect 4-0 on the season and will be back in action on Tuesday evening as they face McKendree University in Lebanon, Illinois at 7 p.m.