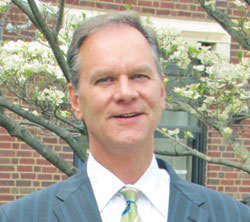 Lindenwood University-Belleville President Jerry Bladdick has announced his intention to resign at the end of the calendar year.

Bladdick was hired as LU-Belleville’s chief administrative officer and vice president in 2009, when the campus prepared to begin offering daytime classes after being a staple for LU’s accelerated evening programs since 2003. In 2009, the campus became Lindenwood’s only extension site to offer daytime classes.

According the school’s website, LU-Belleville now has an enrollment of approximately 2,300 students and 30 undergraduate and graduate degree options.

Bladdick was named president of the Belleville campus in May 2013. He is the first to hold the title.

Bladdick received a Bachelor’s degree in Public Relations, Advertising and Applied Communication from Southeast Missouri State University in 1985. He earned a Master of Science in Gerontology, or the study of aging, in 1993 and a Doctor of Education in Instructional Leadership in 2013, both from Lindenwood University.

University President James Evans, whose own retirement is effective May 31, sent an email to Lindenwood faculty members to note Bladdick’s work toward a “first-rate liberal arts college.”

“Although he will serve Lindenwood for yet another eleven months, at this time I wish to publicly express great appreciation of his dedication and superb work in behalf of the University, its mission, and its students,” the message read.