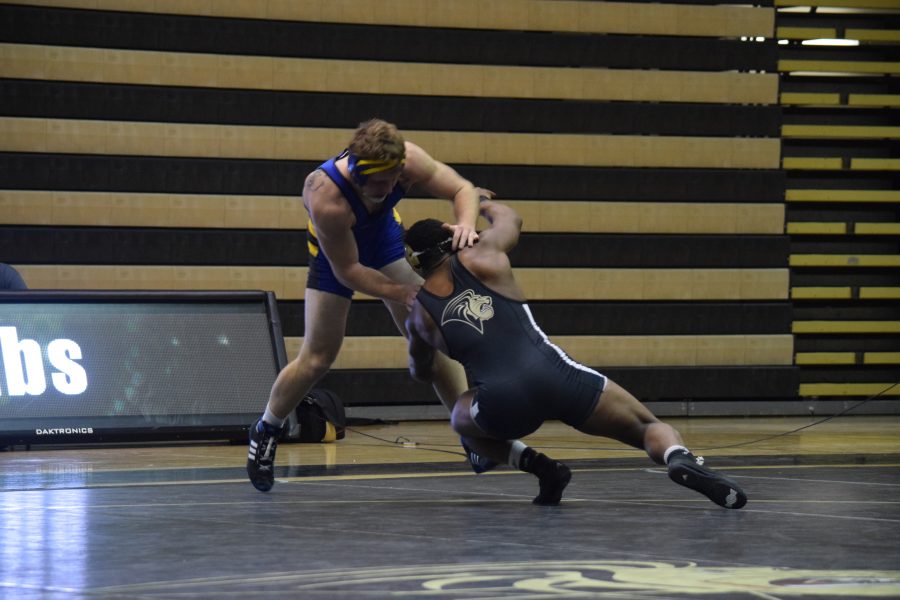 For the second straight dual, senior John McArdle recorded an early takedown and subsequent pin to beat his opponent. The importance: he solidified victories for the Lions. The difference today, however, was capturing the MIAA Regular Season Championship, the first such title in program history.

“Its awesome for our program,” McArdle said. “Its our first time being MIAA wrestling champs as a team and first [conference title] this year for our school. For my senior year its a baby step, but we have bigger and better things coming.”

Finishing out their conference slate, the Lions (10-4, 5-0 MIAA) started quickly against Newman University (2-8, 0-4 MIAA). Senior Marco Tamayo, ranked sixth in the nation, took the decision at 125-pounds to being the day, and with the Jets open at the next two weight classes, the Lions found themselves up big. Newman gained seven points in the next three weight classes with both a major decision and decision, and Lindenwood recorded two victories by fall from senior Derrick Weller and McArdle.

It “is just a testament to the guys and buying into the philosophy,” Lindenwood assistant coach Jimmy Rollins said. “They’re starting to turn a corner and get prepared for regionals and nationals.The history of this program is long and very storied. So to be able to add this to it is a big step in the right direction.”

With the win already secured following the McArdle victory, the remainder of the dual appeared to be smooth sailing. However, Newman redshirt-junior Bobby Bowman threw a wrench in the script, upsetting No. 3 nationally ranked, senior Kenny Breaux. Following a medical timeout taken by Bowman for his left knee, Breaux gave up a takedown and Bowman gained three additional points on an attempted pin.

“Kenny got a little overzealous in couple of areas and gave up some points,” Rollins said. “But, if we are going to give up points I would rather give up points being overly aggressive than not being aggressive at all.”

Rollins also believes that these learning moments can only benefit the team as they move closer to the postseason, which begins next Sunday with the MIAA Tournament Championship.

“That is something that is going to be fuel for the fire for Kenny Breaux. He’s a kid that gets fired up and he’s going to eat this one and take it very hard, but its going to get him ready for Tuesday and Kenny is going to be a whole different man that time.”

Before the Lions can look towards the postseason they have one final non-conference dual with city rivals, No. 1 Maryville University, on Tuesday. Although, the Saints defeated Lindenwood earlier this season at the National Duals, the Lions see each task ahead of them as another piece to the puzzle, and understand the work it will require.

“We need 100 percent commitment and no one can give up,” McArdle said. “We need 100 percent effort from everyone on the team, whether that be a starter or a backup…This is a historical because it is our first time. So, its pretty important, but for us we think of it as a small step.”