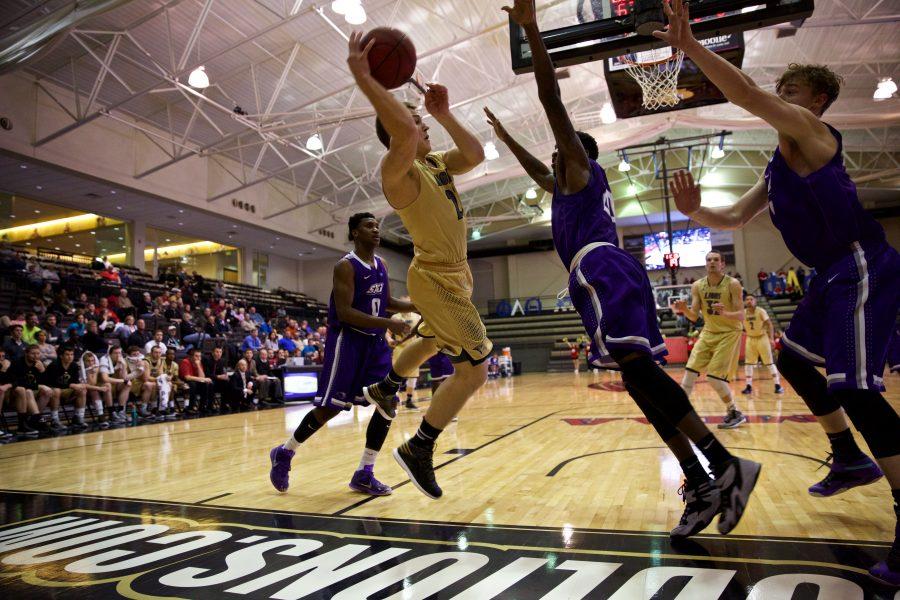 In the biggest blowout of the season, the men’s basketball team defeated Southwest Baptist 93-46, Feb. 11 at the Hyland Arena.

Leading by as many as 50 points in what was described by head coach Brad Soderberg as “a practically perfect game”, the Lions dominated both ends of the court from the opening tip.

Putting arguably the best defensive showcases of the season, the Lions limited the Bearcats to just 19 points in the first half. Combining for 15 of the team’s 25 defensive rebounds, Chanse Creekmur, Sam Mader and Garrett Reeg took control of the boards allowing only 11 second-chance points. This marks the second time the Lions have held an opponent to under 50 points in this season.

Shooting 100 percent from the line and over 56 percent from behind the arc for the ninth time this season, all but one of the players listed on the active roster recorded points. Darris Smith lead the team with 20, while Cory Arentsen, LJ McIntosh and Michael Boos all broke double-digits as well. The bench also showed its depth once again posting a season-high 51 points.

Moving to 11-4 overall in the MIAA, the Lions still sit atop the standings as the post-season quickly approaches. With Central Missouri and Northwest Missouri also posting double-digit wins to Feb. 11, the three-way tie for first place still remains.

Looking to gain the advantage over CMU, the Lions head to Warrensburg, Missouri on Feb. 14 to face the defending national champions for the second time this season. Looking to repay a 82-68 loss back on Jan. 24, the Mules will bring a four-game win streak to their home court. LU holds a record of 4-5 on the road this season.