Lindenwood Fashion Show Is Classy Like Wine, Sweet As Chocolate 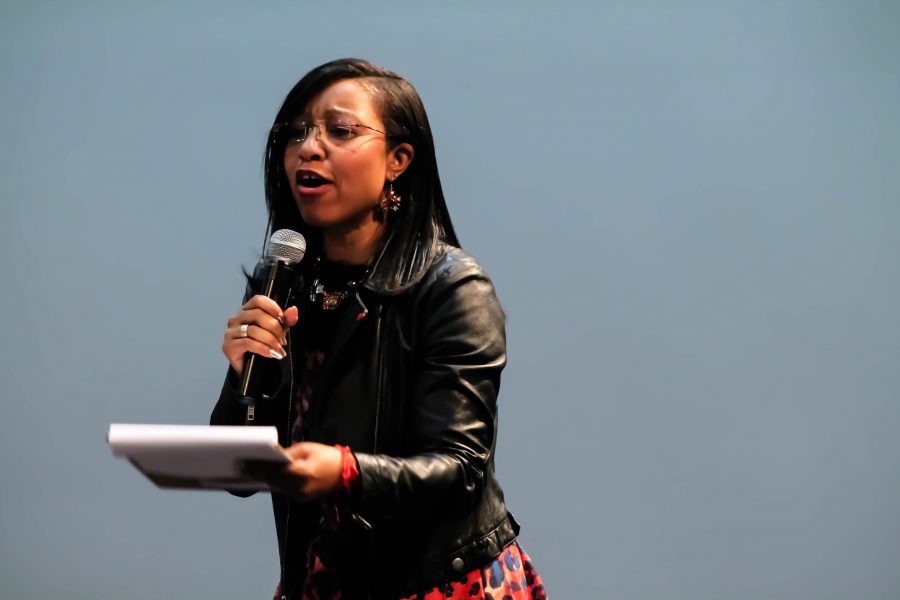 Lindenwood University fashion designers took to the stage on Friday, February 13 to display their designer lines at the Fresh 102.5’s Wine and Chocolate event in the Foundry Art Centre.

The 7th annual Wine and Chocolate event is a fundraiser for the American Heart Association Go Red for Women to raise awareness for American Heart Month.

This is the second year that the fashion designers have displayed lines for the event. Chajuana Trawick, Assistant Professor of Fashion Design, was a driving force in the show’s success. “This year we had 2 weeks to produce the show and there were more designers, fashions and sponsors involved. Last year, we were given 3 days, and it was challenging, but we received great feedback”, said Trawick.

The main entertainment for the night was the fashion show. Seven designers from Lindenwood had lines that wowed the audience with bold, modern, and edgy looks that showed incredible skills and passion.

Many in the crowd were commenting on the styles and designs, saying that they rivaled what is seen on shows like Project Runway and America’s Next Top Model.

One designer, Alexis Cook, displayed her line called, Avant-Garden. Her line showed a simple, but elegant theme of yellow and blue base colors,with splashes of coral in a floral pattern to tie each dress together. The overall concept and theme displayed a sense of relaxation, fun, and class, and the floral pattern made the garden part of her designs shine.

Another designer that made a wave at the show was Isaiah Jenkins, displaying his line, Driven. His line was pure class, sophistication, and elegance. Playing on the refined colors of black, white, and silver, each outfit perfectly accentuated its model’s form, and portrayed a high level of confidence that was carried over every part of the stage. The diversity in styles, from floor length dresses to a suit and top look, added to the overall dynamic of the line.

Delisha Smith, the fourth designer whose line graced the runway, showed off the line she entitled, Introspection. Smith’s line is simply divine, with strong elements that got the audience buzzing with its beautiful and poised sophistication. The line played on colors such as red, yellow, black, and white with all the outfits blending perfectly together in bold shades of confidence. Two of the designs, one black and one white, featured a silky cape that flowed gracefully behind each model, which made the dresses stand out and left the audience marveling at the skill and refinement of each new style.

The last of the seven designers to grace the stage was Richard Cotto, a graduate student, whose line was entitled, Bizarch. No other line could have ended the night like Cotto’s did. The bold color choice of yellow and purple worked in a way that striking. Coupled with the modern and edgy elements of each dress, set to dark and mysterious music, led to a show that left the audience speechless. Each piece of the line was vibrant and full of passion. Bizarch showcased a brilliant display of ingenuity and was a spectacular way to bring a wonderful night to a miraculous end.

All seven designers put forth great designer lines that showed a high level of skill and creativity. Each outfit showed passion, elegance, and class from their designers, and the event proved to be a great success for the fashion department, and the designers themselves.