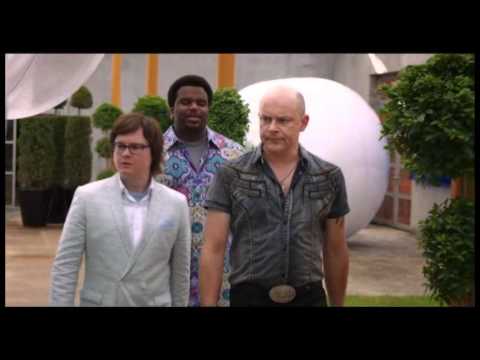 Can you recall a time when your best friend stayed over way longer than you anticipated? Inside-jokes started to become tiresome, small nuances in their actions bugged you and you eventually found yourself looking forward to them leaving. “Hot Tub Time Machine 2” is a lot like that friend.

Taking place five years after the first film, the story begins with Lou (Rob Corddry) being murdered at a party at his mansion. In an attempt to save his life, Jacob (Clark Duke) and Nick (Craig Robinson) try to use the titular machine to go back and save his life, but find themselves ten years into the future, with Lou still alive, and, after a series of conclusions that still make no sense to me, the gang begins to search for Lou’s would-be-murderer. It is required to have seen the first movie to understand the plot of this movie.

There are no nostalgia rushes or historic commentaries like the first movie. “HTTM2” substitutes this with a massive amount of current cultural references and even more self-poking humor. This will likely make the movie not age nearly as well as its predecessor.

Jokes are delivered like a modern sitcom without the laugh track or a modern “Saturday Night Live” episode. There are genuine laughs to be found, but there are scenes that are just plain unfunny and take up too much time. Towards the end, the movie just feels out of breath.

The overall design of “HTTM2” is disjointed and lazy. The transitions between jokes and serious scenes are unnatural and random and the plot holes, which are never clearly identified as intentional or not, do not help either. Also, the performances, including new addition to the cast Adam Scott as the son of John Cusack’s character in the first movie, are nothing special and the cinematography is overall boring.

“HTTM2” has many issues in what it delivers, but if you consider yourself a die-hard fan of the original, the sequel might bring some mild amusement.