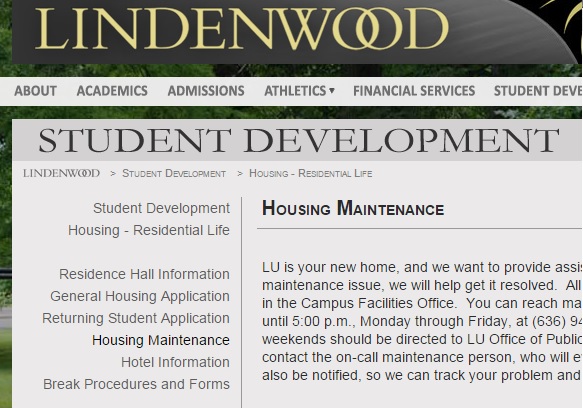 As a student, have you ever had your basement flood with sewage, forcing you to wait days before maintenance could come and clean up the stench? Have you ever dealt with a broken vent and were forced to live in conditions comparable to an arctic tundra until LU sent someone to fix the problem? If not, then you are the exception.

Many times, students who live in men and women’s housing have experienced severe maintenance issues and unacceptable living conditions that are potentially detrimental to their health.

“The first time I had a sewage leak in my house it took maintenance three days to clean it up and two weeks to fix the problem,” said senior Miriah Ludke.

“Considering this is a severe health concern, it should have been at the top of their list and handled that day.”

The National Resources Defense Council reports that almost 2 million cases of illnesses per year are linked to sewage backups and contamination.

According to the NRDC, there are five main bacteria that can be found in sewage:

Hazardous sewage conditions are not the only issue facing students.

Sophomore Sam Reynolds said he spent 18 hours fixing up his house without the maintenance office’s help.

“My house was disgusting when I first moved in,” Reynolds said. “Broken lights and windows everywhere, dust, dead bugs, the door didn’t lock, the house smelled like gas and the fridge looked like someone died in it. These things should have been fixed before a student was placed in the house.”

The seemingly unending complications with LU houses pose the question, have they been inspected for occupancy hazards? If so, who does the inspections?

According to St. Charles City Community Development, occupancy inspections for rental properties are required before a new renter moves in. This, too, includes LU housing.

Starting Point Real Estate agent Cassandra Hall said that the city comes up with living standards for a reason, and no one is an exception.

“Occupancy inspections were created to avoid slumlord conditions and to keep tenants from having to live in inhabitable spaces,” Hall said. “LU should not be exempt from these standards.”

LU maintenance could not be reached for comment or clarification of inspection procedures.

Senior Deanna Mendoza said she believes that maintenance generally responds quickly, but that the number of problems she reports is unacceptable.

“Whenever I call maintenance for an issue, they usually show up that day or the day after,” Mendoza said. “But the problems seem to always be the same; spiders, black mold in the bathroom, ants in the kitchen, and broken windows among other issues. Nothing seems to get permanently resolved.”

Mendoza said she understands that maintenance has a tough job, but students should not have to undergo these types of problems as a result.

“Maintenance obviously has a hard job and has a lot of issues to take care of, but that’s not the students’ problem. If we are paying to live here, then our living conditions should be more important to Lindenwood.”