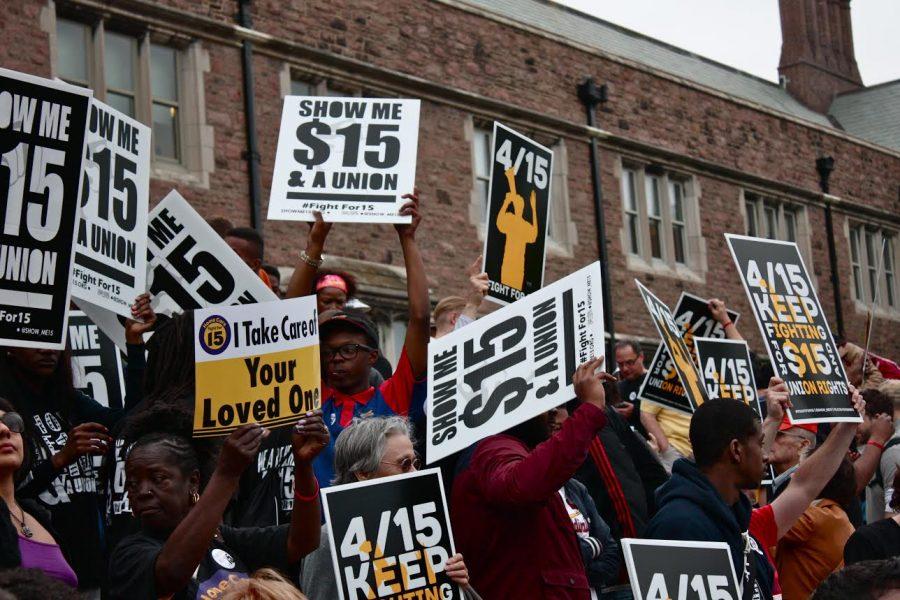 Hundreds of adjunct instructors, students and other workers gathered at Washington University in St. Louis to rally for workers’ rights on Wednesday, April 15. The rally was one of countless demonstrations held across the nation.

Show-Me $15 and the Service Employees International Union partnered with the Faculty Forward initiative to rally for workers’ rights. Low-wage workers, including food-industry, retail and health-care workers, demanded a minimum wage of $15 per hour, while adjunct instructors rallied for $15,000 per course.

Adjunct instructors from schools like St. Louis University, St. Charles Community College and Washington University were among those who participated in the joint effort.

Event goers said their main goal was to bring awareness to the issues.

“A lot of professors and instructors are very shy about this and we don’t want our students to know that we have to piecemeal our lives together,” said SLU adjunct Sheri Anderson, “but we really need to be brave and to start talking out.”

Anderson said she and other adjuncts were excited to partner with Fight for $15, the national organization for low-wage workers’ rights.

Demonstrators included health-care professionals with signs that read, “I take care of your loved one.” Fast food employees who work full-time at minimum wage were also present.

Those who rallied at WashU were among thousands nationwide who demonstrated in cities like Atlanta, Chicago and Philadelphia.

Anderson said she found many low-wage workers who were surprised by adjuncts’ salaries.

“Because they have such high education and they work at a university, they assume– everyone assumes– that adjuncts are in an upper echelon of society and it’s really not the case, and in many cases they make less than fast food workers, for example,” she said.

WashU adjuncts voted to unionize in January, and are still in the preliminary stages of seeing major changes.

Lindenwood has an adjunct rate of 63 percent, acording to Vice President of Human Resources Deb Ayres in December 2014.

“That’s really a testament to the good work that adjuncts do,” Boehm said. “All we’re asking for is a fair living wage.”