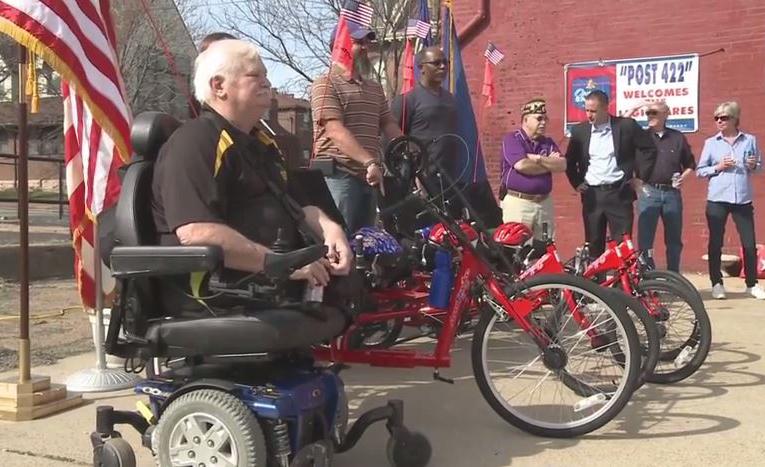 Missouri’s first AMBUCS chapter is helping veterans a free set of wheels to help them get around. Many of veterans face a life-changing disability, and for some, re-entry into civilian life isn’t easy.

“I’m not a social person anymore I’m afraid to go out publicly so much,” said Purple Heart recipient Chris Osborne.

Four veterans living with disabilities were given therapeutic bikes March 21 at the American Legion Post 422 in Soulard. The AmTryke ranges from $750.00 to $1,100.00 but the amount isn’t what it’s about.

Osborne said the gift will allow him to spend more time with his young daughter.

“We’re very active people and to be able to start doing things with her more and enjoying it myself instead of going through the pain of doing it for her now I can enjoy it with her it means a lot because she loves to be outside and I want to be there with her.”

Soulard AMBUCS, a non-profit organization believes those veterans should have every opportunity to be engaged in the active lifestyle they had prior to their disability. They’re dedicated to creating mobility and independence for people with disabilities. They raised funds to give four veterans an AmTryke and the difference a set of wheels made on one of the recipients was profound.

Disabled riders often have balance issues preventing them from bringing a bicycle up to speed. To aid this issue, the unique tricycles, which can be hand or foot operated, are designed to improved motor skills, strength development and self-esteem for all riders of varying degrees of physical limitations.