Evans known as a thoughtful man 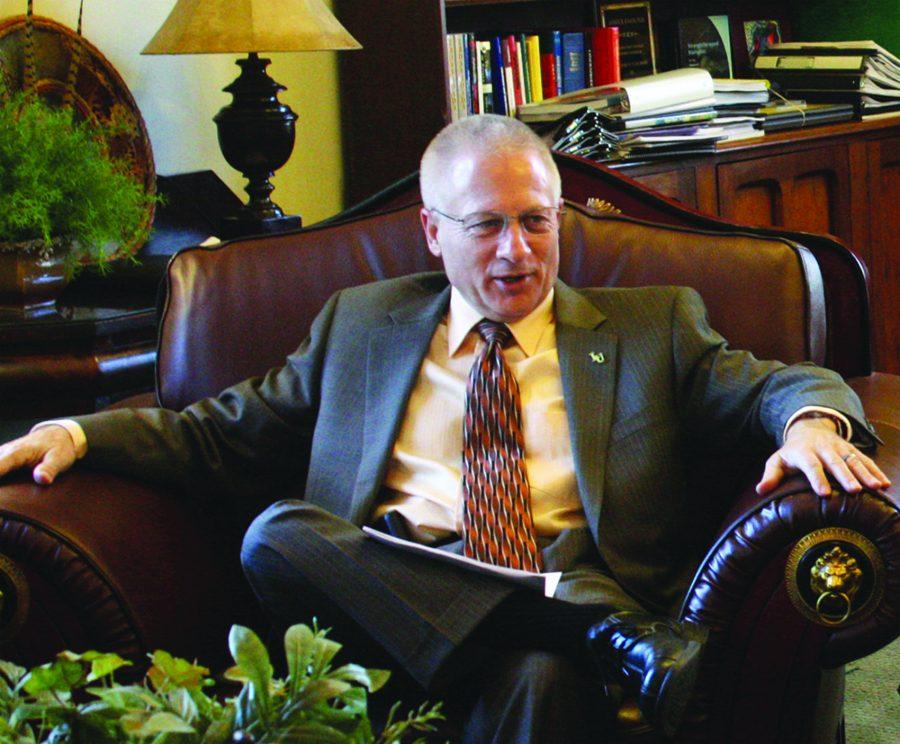 James Evans is known for his ability to create a comfortable work environment.

He removes his glasses and holds them between his fingers as he considers his response. He looks thoughtfully up and to his right, as if that is where he will find his answer. He considers his thoughts before he says them, but not to scheme or dodge. Once he’s collected his ideas, his eyes return to his conversation partner, and he answers honestly.

President James Evans is known by his colleagues, above all else, as a fair man.

“He really thinks before he speaks,” said Jann Weitzel, who has worked as Evans’ second ranking official for eight and a half years. “Often there’s a little pause, but then you know that when he gives the answer, it’s going to be the right answer.”

Evans is also able to provide calm balance to all circumstances, regardless of the level of difficulty, according to Vice President for Human Resources Deb Ayres.

Evans’ sense of humor has also left an impression on the other occupants of the Executive Offices.

“He’s not one to tell a joke,” Weitzel said, “but he’ll throw out a pun, and I know there are times that he’s said things that have gone right over the top of my head, but he doesn’t come back and say ‘Oh, you didn’t get it.’ He doesn’t embarrass you.”

Judy Shanahan, who served as the Executive Assistant to the President for three presidents before Evans, said he has the driest sense of humor she’s ever known.

“He’ll make a comment and then he’ll be all the way down the hall before I get what it was he said,” Shanahan said. “His mind is so quick and so sharp.”

Ayres said her favorite time spent with Evans is when she manages to make him laugh.

“Every now and then, he rears back in his chair and laughs a hardy laugh, and I feel like my work that day is done,” she said.

One running joke in the Executive Offices is Evans’ stealth. Shanahan said she calls him Glider, because he sneaks in and out of his office without her noticing. Weitzel said she has been startled on more than one occasion when she looks up from her computer screen to see Evans in the doorway.

According to Shanahan, one of Evans’ greatest accomplishments is creating an atmosphere in which one enjoys working.

Others would say his greatest accomplishment is raising Lindenwood’s level of academic rigor, which was part of his vision for the university when he became president.

He strengthened the academic personnel by raising the criteria used to select faculty members. The university put a greater emphasis on hiring those who had some experience teaching at the college level and who had achieved the highest degree in their discipline. He also pushed for faculty to have more control over the curriculum.

“I would say the greatest accomplishment during my administration, the one that makes me the proudest, is the realization of participative governance of the university. The shared involvement of students, faculty and staff; the shared governance; the shared decision-making, together, represent my proudest accomplishment at Lindenwood,” Evans said.

Evans was raised in a working class family in rural Ohio. He went to a small high school and played football. He raised homing pigeons and several pets. He was skilled in the physical sciences.

“I was in the local public library, looking for a chemistry book, and somehow bumped into a psychology book that was sticking out,” he said. “I knocked it off, picked it up and opened it to the table of contents and saw a lot of interesting topics.”

He checked out the textbook to read for fun, and ended up later deciding he should major in psychology.

“Psychology is inherently interesting because of the subject matter of human behavior and thought, but it also was relevant enough to everyday life to be a useful discipline. It was important to me that my major be really useful,” Evans said.

When he was 17, he went to a Christian liberal arts college in western Pennsylvania called Geneva College. There, he found his two greatest loves.

The first was Lois, who has become known in her role as the university’s first lady.

“She has been a very integral part of this presidency,” Weitzel said. “To anybody who walks in the house, you instantly become a friend. She’s very open, very vivacious. She can talk to anybody on any subject.”

The second was his love of the liberal arts.

“At liberal arts colleges you get a variety of interests, a diversity of interests,” Evans said. “You also get an atmosphere of eager, intellectual curiosity.”

Evans said his experience with liberal arts education, both as an undergraduate at Geneva and a graduate student at Iowa State University, predisposed him to seek out an equally stimulating workplace.

Lindenwood was the perfect place to land, he said.

“He’s made so many changes to this institution in the last 41 years,” Weitzel said “but just in the last eight and a half years, we’re not the same institution that we were.”

Evans said his most challenging task as president was finding enough time to do all that he is expected to do, from being an ambassador for the university to raising funds or acting as a spiritual leader. His biggest regret is not finishing the new library before he leaves.

Evans said he has made an effort to be available to his students since he was a professor, and he continues that policy in his role as president.

“What I look forward to the most is the opportunity to meet directly with students,” he said. “It’s amazing to actually see the intelligence of the students in action in these meetings. Sometimes we older people presume younger people don’t have a lot of wisdom, but they do. You just have to meet with them enough and let them feel comfortable enough so that they start expressing the wisdom.”

In addition to hearing the voice of the students, Evans’ enjoys budgeting and planning.

Evans said he and his wife plan to live in Ocala, Florida, where he will have to learn to be a “good retired person.”

He hopes to take music lessons for piano and possibly guitar, finish the dozen books he has started over the years but hasn’t had time to finish, and he has already looked into organizations in Ocala where he could do volunteer work.

“I would say that we wish him and Lois an amazing retirement,” Weitzel said. “We’re going to miss him. He’s an amazing president.”