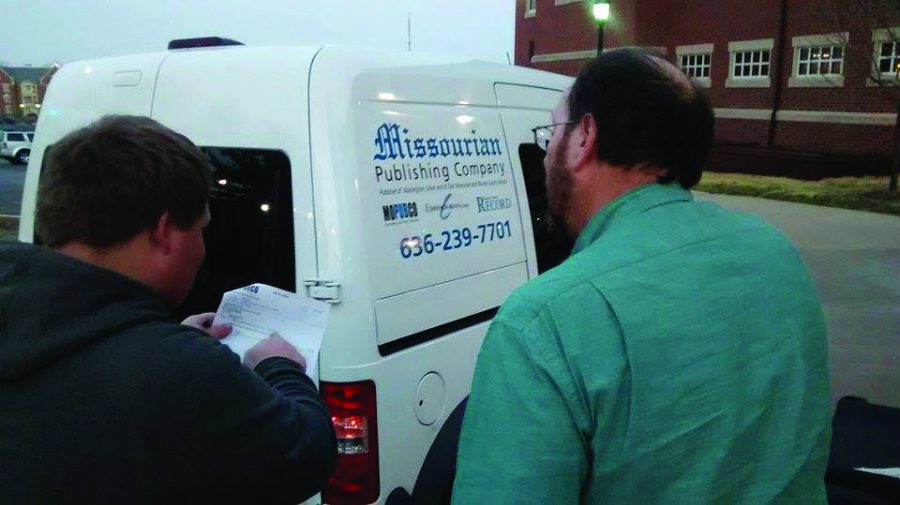 Photo by Jonathan Davies Professor Tom Pettit meets with Missourian deliverer to pick up the Legacy.

The retirement of Tom Pettit will mark the end of an era for Lindenwood’s journalism program.

Snagging Pettit after he had worked at the St. Louis Post-Dispatch for 23 years, Lindenwood handed him the task of building a student publication from the ground.

“Spellmann was extremely protective of the University and was reluctant to give the students a voice to complain, which of course you need to do in a student newspaper,” said Dean of Communications at Lindenwood.

Lindenwood was paperless for 17 years before the arrival of Pettit in 2006, which coincided with the arrival of James Evans as president. One of the first things Evans did was authorize the development of the Legacy.

“It was very hard to find someone with an academic background and professional expertise with thorough experience in journalism, particularly newspaper,” Wall said. “He also showed a great understanding of students, something we often take for granted.”

Pettit studied journalism at the University of Kansas before switching to education in his last year. He soon after got a job teaching and advising publications.

“I knew withing a year or so that I didn’t want to spend the rest of my life in a small town in Kansas, so I decided to go back for my Master’s in journalism,” Pettit said.

Pettit taught at two universities and worked at three papers as a copy editor before moving with his wife to St. Louis for a job at the Post-Dispatch.

“It was the first of Joseph Pulitzer’s newspapers, and in the middle of the 20th Century, was one of the top-five newspapers in the country,” Pettit said.

When the Post-Dispatch sold in 2005, Pettit took a buy-out with no idea what was next for his career. He soon stumbled across an ad for Lindenwood seeking positions in journalism.

In the spring of 2007, under Pettit’s advisement, Lindenwood published its first issues of the Legacy in March, April and May. March’s issue was one page, front and back, April’s was two pages front and back and May’s was four pages with a front page feature of the candlelight vigil held on Lindenwood’s quad for the victims of the massacre at Virginia Tech.

Pettit’s legacy will survive through his students.

Emily Adair, Editor-in-Chief of the Legacy/Lindenlink, said that one of the best things about him is the way he unwaveringly supports the paper’s staff.

“He is very much a proponent of stepping back and letting the students do everything,” said Adair. “We are responsible for every decision, and as a student newspaper, that’s the way it should be. Then, when someone directs criticisms at him rather than the students, he happily defends our decisions.”

According to Wall, Pettit has been “the guy” since day one.

“He has surely earned his retirement,” Wall said.

Pettit isn’t exactly sure how he will spend all his time.

“Mainly, when I get up in the morning, I know I don’t have to drive the 25 miles to St. Charles,” Pettit said. “When they’re talking about how there may be icy spots, I’ll say ‘so what,’ turn over and go back to sleep.”