The surprise drama of the year – “Straight Outta Compton” review 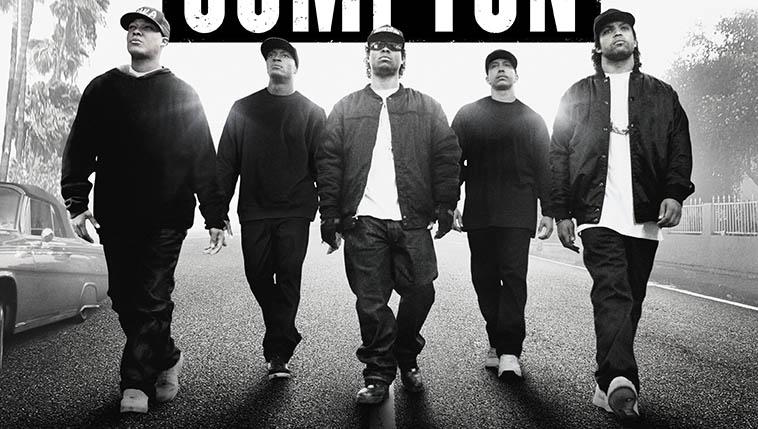 Photo from epk.tv N.W.A take the world by storm in the biopic "Straight Outta Compton"

Heavily emotional hits, numerous laugh-out-loud moments and an overall theme of art and self-expression. These terms are not normally thought of when gangster rap is brought up but the N.W.A biopic “Straight Outta Compton” uses them to tell the origin of the rap group that heavily influenced the genre. There may be some things that the film may be missing, however, director F. Gary Gray accomplishes something special that few would be able to do.

The story starts out in the mid-80s in Compton, California, with the rise of N.W.A. The founders of the group form it as a way to make money in their harsh environment and to express themselves by reflecting on their day to day lives in a crime-stricken area. The group consists of five men but the film only focuses on Eazy-E (Jason Mitchell), Ice Cube (O’Shea Jackson, Jr) and Dr. Dre (Corey Hawkins). The plot continues with the events that the group went through, their disbandment and what the three went on to accomplish afterward.

The pacing is pretty good, overall, thanks to the great narration. As someone who has been an N.W.A. fan for almost eight years, I can say that the events that take place are pretty accurate and the characters depictions are spot on. Even for a film that clocks in at 147 minutes, it does not over stay its welcome since there so much to be told. The only real problem with the narration is that there are some very important things that happened to the characters during the time it takes place, most notably some controversies surrounding Dr. Dre, that the film glosses over. There is not a second wasted for the most part, but in the third act, the film goes overboard with some cameos. While the cameos are enjoyable, it feels like too much time is wasted on them and not enough time is given to the controversies mentioned previously.

The screenplay keeps the relatively long film entertaining from start to finish. The hardships of living in Compton in the 80s and 90s come to life on screen thanks to some powerful scenes. These may come off as slightly cliché, but their historically accuracy and craftsmanship makes it forgivable. It becomes clear that N.W.A created their music from events that happened, so even with songs that people may not be able to personally relate to (I.E. “F*** Tha Police”), it is still easy to appreciate them from an artistic standpoint.

Mitchell, Jackson and Hawkins all give incredible performances. The drastic different shift in tone throughout the film, such as the stress from contract negotiations, fear in intimidation practices and coping with the hardships, demand a lot from the actors but everyone is able to deliver. Mitchell, in particular, steals the show at the end as a fallen Eazy-E.

Aesthetically speaking, the head-bob-inducing music that N.W.A is known for is remastered, and is an enjoyable highlight thanks to the fantastic sound editing. Cinematography is also very well done with shots capturing the emotional tones just right. From the harsh streets of Compton to the hypnotizing concerts, the cinematography is able to capture all the right moments.

The imperfect “Straight Outta Compton” is a recommendation even for those not interested in its source material and a must-see for fans of the group, however, at the end of the day, at its core, it is a well-acted and well-crafted drama.