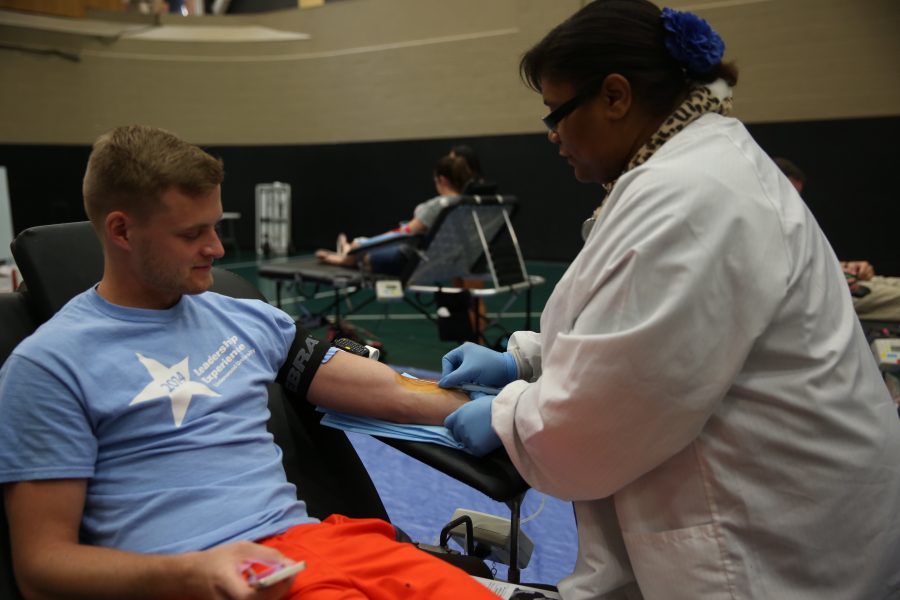 Taking over the indoor soccer field in Evans Commons, the American Red Cross held a blood drive in hopes of scoring a different kind of goal.

The blood drive, which was held on Aug. 25-26, looked to members of the LU community to donate their blood for use in local hospitals.Certified nurses and other medical professionals ran the event, while student volunteers helped recruit and register donors.

The goal of the event was to collect 60 units of blood.

Senior Zack Davis was one of the donors who participated in the event and has given blood at several different blood drives. After learning from one of his professors that the Red Cross was hosting an event on campus, his attendance unquestionable.

“I couldn’t even see why I wouldn’t,” Davis said. “If I know it’s going to a good cause, why even hesitate?”

Davis says encourages other to donate in the future and plans to do so himself.

“You have to think about the cost to you and the effects it has on others,” Davis said. “Every little bit helps.”

According to Wilma McGlothlin, a donor recruitment representative for the Red Cross and a LU alumna, the blood taken from students would play a crucial role in helping combat a issue local hospitals are currently facing.

“Right now we have a shortage on blood and when we get to the point that we don’t have enough blood to provide to the hospitals, they have to postpone elective surgeries,” McGlothlin said. “We’re not quite to that point, but we are very close,”

“At blood drives like here at Lindenwood it is so important for us to make goal and collect those units we’ve promised the hospitals.” McGlothlin said.

Due to scheduling conflict with another university, organizers were forced to move the blood drive at LU from Sept. to the first week of school. They believe the change in date is the culprit for falling short of the goal to, bringing in only 43 units by the end of the two-day event.

The Red Cross will be returning to campus during Homecoming weekend and Sibley Day to host more blood drive events.