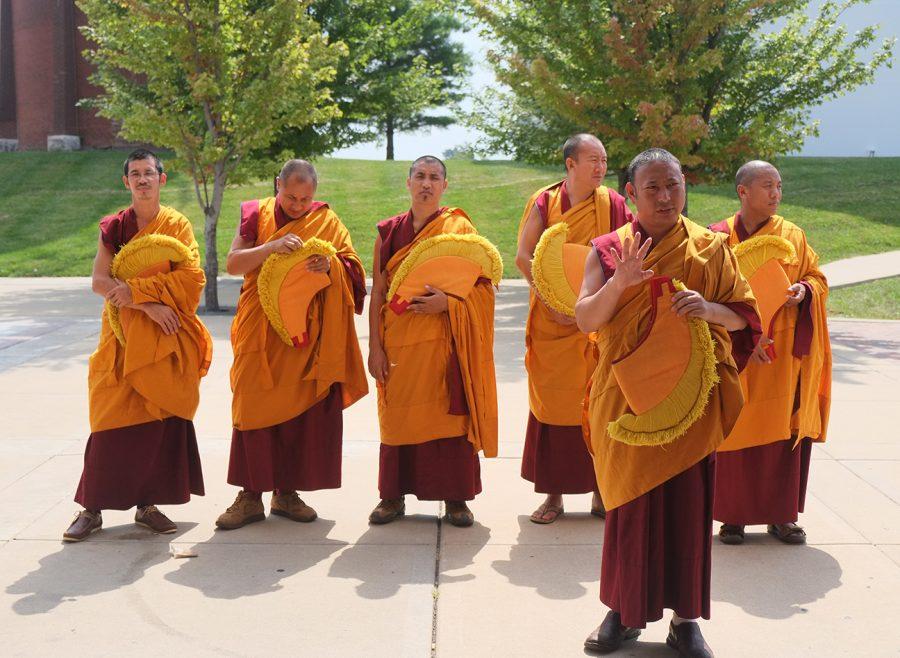 They stood behind a long table showcasing handmade jewelry, rugs, prayer books, journals and wall decorations, representing a culture unknown to the majority of students. These items were crafted in the Tibetan refugee camps in South India.

Steve Dasovich, chair of the anthropology and sociology department, said the department invited these monks to Lindenwood as part of its speaker series.

During three lectures held on Sept. 4, the monks gave more insight on their culture and revealed that they currently live in refugee camps in South India, as they were exiled from Tibet due to the ongoing Chinese suppression.

According to Dasovich, the monks’ goal is to raise awareness of the refugee situation in India, Tibet and China. They also aim to inform people about their lives in the Drepung Gomang Monastery.

The monastery, located in South India, is home to 2,000 Tibetan monks and also serves as a monastic university where monks are educated in learning, contemplating and practicing Tibetan Buddhist thoughts and science.

St. Louis based Patty Maher is a historical developer and activist for Tibetan freedom. She accompanied the monks to Lindenwood as their coordinator.

“Every year they visit St. Louis during the first two weeks of September. Their leader is the Dalai Lama, and the monks come here to talk about his teachings, as well as a life of non-violence, peace and compassion.”

Maher described the importance of the funds raised at the monks’ merchandise table.

“The proceeds of the items and merchandise sold go directly to the 2.000 Tibetan Buddhist monks to provide food, housing, education and medical attention,” said Maher.

During the three lectures, attendants were able to witness the monks debating in their native tongue. The discussion is performed as a traditional art form.

Geshe Tsewang, one of the monks, explained that debating about religion, history and science is considered a main practice in Tibet. During the debate, the monks gathered in a circle and took turns trying to find answers about the logic of our minds.

“Most scientists focus on the chemicals in our brains,” Tsewang said. “We are trying to find psychological insights and figure out what is going on inside our minds and how much of that is part of biology.”

Back in India, those debates are held in front of hundreds of other monks, and sometimes in front of the entire community.

Since the Drepung Gomang Monastery is also a university, students from the U.S. and the rest of the world are invited to visit and take part in their debates every year.

Lindenwood student Maria Castillo attended the morning lecture and was excited about the rare opportunity.
“I thought it was fun and completely different,” Castillo said. “I didn’t really understand most of what they were saying, but it was just very engaging to listen.”

For most students, their visit was unexpected but welcome. The contrast between the modern feeling of Spellmann’s masonry and the monks’ colorful garments and friendly demeanors was intriguing. Their presence was a great opportunity for students, faculty and staff to escape the every day bustle and dive into the exotic culture of Tibet.