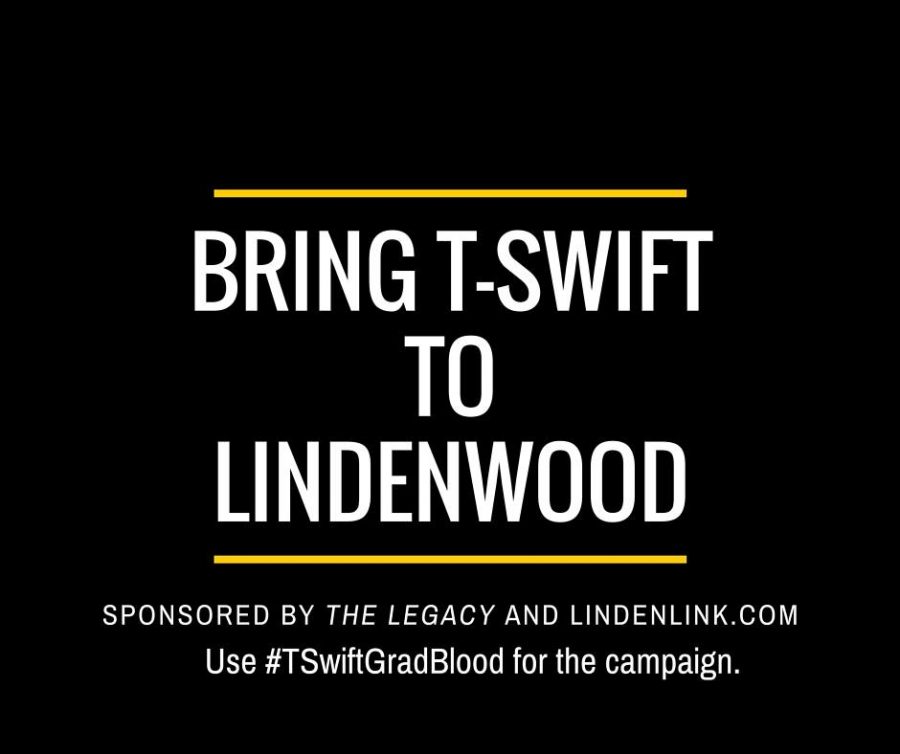 The Legacy and Lindenlink have kicked off a campaign to bring international superstar Taylor Swift to LU later this month when she has two concerts in St. Louis Sept. 28 and 29.

The campaign includes a Facebook page – Bring Taylor Swift To Lindenwood University – which surged to more than 1,000 likes in less than 48 hours. A Twitter account was also created over the weekend as part of campaign.

Swift has an unusual link to the university: her late maternal grandmother, Marjorie Moehlenkamp Finlay graduated from Lindenwood in 1949, when it was still known as Lindenwood College. She died in 2003.

Moehlenkamp, who later was known professionally as Margie Finlay, was born in Memphis, Tennessee, on Oct. 5, 1928. She lived in St. Charles during her time attending Lindenwood and studied music with an emphasis on vocal studies, according to the university archives.

She received a bachelor’s degree in music and also won an Alumni Merit Award in 1961.

After graduating from Lindenwood, Moehlenkamp continued her studies at the Berkshire Music Center in Tanglewood, Massachusetts, and then later in New York City.

She married Robert Finlay, the president of Raymond Construction Co. at the time, in the spring of 1952 and moved with him to Havana, Cuba. Political unrest in Cuba later drove them to Puerto Rico, where she gained fame as an opera singer and entertainer on television.

In an interview with Rolling Stone last September, Taylor Swift said she has taken after her grandmother in ways she did not see coming.

“We have the same nose,” Swift told the magazine. “We both like to dress up. And she loved to entertain. At her parties, she would get up and sing for her friends.”

Rolling Stone also wrote that when Swift’s grandmother took Swift to her first musical, a children’s production of “Charlie and the Chocolate Factory,” when she was 10 years old, this developed a passion in Swift for singing and acting.

“It affected me more than I realized,” Swift said.

Any students wishing to help with the campaign are urged to follow the the social media accounts, and share the content posted on the pages with #TSwiftGradBlood. Along with sharing posts, the campaign is currently asking students, faculty and staff to submit pictures with signs asking Swift to come visit campus while she is in town.

Currently, a video is being filmed to further the campaign, which will involve a spoof celebrating the anniversary of Taylor Swift studies at Lindenwood. The video is set to be released on the Facebook and Twitter pages, Sept. 14.