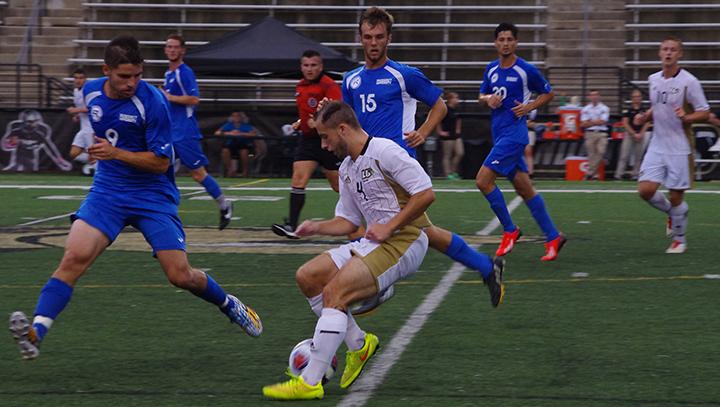 Starting off the season in dramatic fashion, the men’s soccer team has played three remarkable games, earning the number seven spot in the Division II rankings.

Knocking off two ranked teams, along with staging a late comeback in their home opener, LU currently holds a record of 2-0-1.

Before they take the the field against Christian Brothers University on Friday, Sept. 11, here is a recap of the Lions’ first three games of the season, and the strange twists associated with each one.

Beginning the season on the road, the Lions traveled to Quincy, Illinois to take on Drury University in their first match of the 2015 Quincy Soccer Bowl.

Coming off a 16-5 season, which included a trip to the Division II national tournament, the Panthers were ranked 23rd in the nation as they stepped onto the field to face LU, but unfortunately their ranking didn’t appear to tag along with them.

In an outstanding effort that caught Drury Completely by surprise, the Lions scored just over two minutes into the game and never handed over the lead. Scoring on four of their five total shots on goal they won with a final score of 4-2, knocking the Panthers out of the top 25.

While this Tweet was taken down shortly after it was posted, here’s what whoever manages Drury’s account had to say following their loss to the Lions:

Carrying momentum into the second game of the Quincy Soccer Bowl, the Lions faced the competition’s host, Quincy University.

Making it all the way to the NCAA national tournament semi-finals last season, the Hawks sat third in the rankings as they headed into the two-day event. Finishing off the University of Findlay 2-1 in their first match, Quincy hoped to put an end to the Lions’ role as spoiler.

Meeting a similar fate as the Panthers, the competition’s host let three of the five shots on goal by the Lions find the back of the net. LU’s 3-1 win knocked Quincy down to 20th in the national standings.

If beating another nationally ranked team wasn’t impressive enough, here’s a video of Andre Hayne’s bicycle kick goal in the match against Quincy:

After defeating two nationally-ranked teams, the Lions found themselves sitting at 7th in Division II soccer as they headed into the home opener against Rockhurst University.

This time around, the Hawks were the ones who got off to a quick start taking a two-goal lead after being on the field only nine minutes.

While the Lions were able to put a point on the scoreboard before halftime, they faced a 5-1 deficit with less than 20 minutes left in regulation.

As they did in their previous games though, the Lions managed to catch their opponent off guard, scoring four unanswered goals in under 12 minutes. With the teams tied after 90 minutes of play, the game carried on through two overtime periods before ending in a 5-5 tie.