Sibley may get AC, break from heat next year 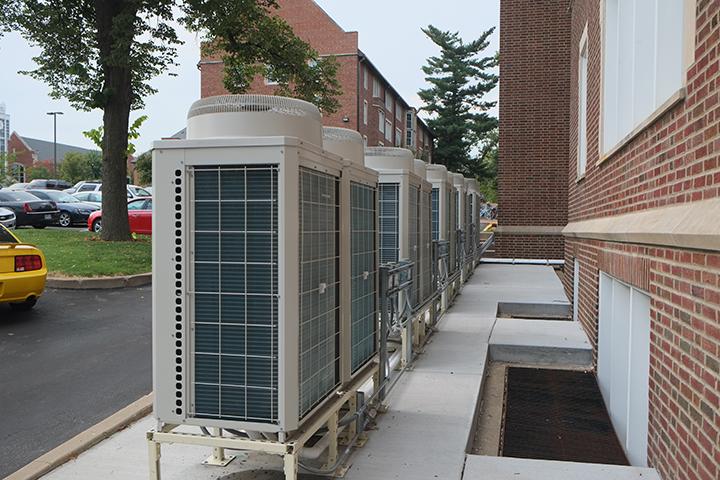 Photo by Nao Enomoto
Within a years time, Sibley may get air conditioning units like these recently installed at Irwin Hall.

In the past, the women living in Sibley Hall have had to suffer through the sweltering summer months because central air conditioning wasn’t allowed in the building, which is on the National Register of Historic Places. Now relief may be in sight.

According to Michelle Giessman, director of student housing, Sibley could get air conditioning next year.

Matheny Heating and Cooling, which installed AC in Ayres Hall this past summer, has been doing inspections in Sibley needed to come up with a plan. It is the last building on campus without air conditioning, said Katherine Davis, Sibley’s RD.

“There is also the privacy factor of the girls to consider when trying to figure out the space needed to perform the task of installing AC,” said Davis. “However, the individuals associated with Matheny Heating and Cooling have been incredibly considerate with each step they have taken in the planning process.”

Sibley is Lindenwood University’s oldest and most celebrated building on campus. It is listed in the National Register of Historic Sites so it comes with some complications pertaining to maintain the structural and historical integrity.

“Sibley Hall is a unique dorm in which the hallways are wide, the ceilings are tall, and no two rooms share the exact same dimensions,” Davis said. “It is exceptionally difficult to try and locate a path for conduit and vents when the rooms are not consistent on each floor.”

For Sibley residents like Lexie Baker, the heat has caused her to invest in a portable air-conditioning unit, something residents are allowed to use. Baker said she likes living in Sibley because of its atmosphere and convenient location on campus. Still, central air conditioning would be a relief.

“I’m from a much less humid climate originally, and I prefer to not take a shower three times a day,” she said.