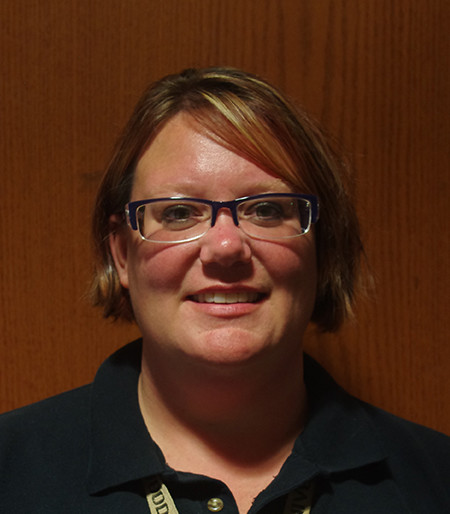 The room is quiet as all eyes are on her.

The residents of Blanton Hall have gathered around security officer Paula Stewart, who visited the girls that night to educate them about sexual assault and self-protection.

As the only female security officer in Lindenwood’s Public Safety and Security office, Stewart is not only dedicated to her job and family but also made it her goal to bring awareness to a topic that is oftentimes overlooked.

After she advised a sexually assaulted girl last semester, the 38-year-old mother of three made it her goal to talk about sexual assault to all girls living on campus through a series of lectures.

The presentations about sexual assault are held in all-women’s dorms on campus. Stewart describes it as “a way to connect with students and let them know that security is here for them.”

During the presentations, she talks about the definition of sexual assault, the influence of alcohol and drugs, how to preserve evidence and tells the girls where to find help.

“The feedback we got so far was overwhelmingly supportive” said Stewart, “since sexual assault is vastly under-reported, trying to educate students is most important.”

When a female Lindenwood student was sexually assaulted last semester, Stewart helped her to deal with the situation. She sat with the student when she spoke to the police, answered all her questions and provided her with resources.

Since all the security officers have to go through hours of training, Stewart was “glad to finally be able to put that training into play.” She found it interesting and life-enhancing “to see the topic from a victim’s perspective.”

This event provided Stewart with new insight and experience to use in her daily operations.

As part of her duties, Stewart is in charge of the Clery Compliance, which discloses statistics and information about crime on and around Lindenwood. She ensures that all crime stats are recorded properly, enacts sexual assault policies, and provides the RDs with approved training.

Stewart has spent her whole life in the St. Louis area. Before coming to Lindenwood, she was working part time at a middle school after being a stay-home mother for 11 years. Stewart and her husband Greg have been married for 16 years.

In 2013, Stewart applied to an open position at the office of Public Safety and Security. To further her education, she enrolled in Lindenwood’s criminal justice program the same year.

When she is not at school, Stewart enjoys watching musicals and plays. Because her three sons are all very sporty, she spends much of her free time driving them to practice and watching their games. What she likes most about her job is the constant alternation of tasks and meeting new people from all over the world.

“I love to meet and talk to many different people,” said Stewart.

Since Stewart married young and started a family early, she enjoys being back at school for both her job and her degree. Her positive attitude towards her job is not affected by being the only woman in the office.

Even though there is not really anything the male officers are unable to handle, she sometimes gets calls if there is any issue at a girl’s dorm late at night.

Ana Castillo, ARD of Blanton Hall, speaks for the girls living in her dorm when she says she appreciates Stewart’s efforts. “It’s important to have these talks because girls don’t realize that they are being assaulted,“ she said.

“Teaching the girls about what consent really means and how they can protect themselves is crucial. I hope that this will contribute to the decrease of college crime.”