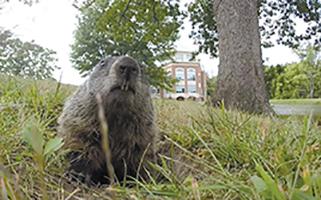 Screenshot from video by Phil Brahm This groundhog was spotted near Hunter Stadium.

They’re furry and cute, but they also can be destructive, said a member of Lindenwood’s maintenance department. For some of the groundhogs, their time on campus is coming to an end.

The critters have been living on the campus for years, but some like to dig under concrete, such as the sidewalks, which causes the cement to crack.

As a precaution, LU’s maintenance has trapped and released about 15 of them on property the university owns along the river, where the groundhogs will have plenty of trees and food.

The relocation only affects those groundhogs considered a risk to the buildings and sidewalks on campus, said Kyle Routh, grounds director at Lindenwood. This includes the animals living near cemetery hill.

Many of the estimated 20 groundhogs live on the historic part of campus, where they find herbs and insects to eat.

Why they chose the campus as their home is not clear, but Dan Zarlenga, media specialist for the Missouri Department of Conservation, said it may have something to do with development in the immediate area.

“We humans unintentionally create a ‘safe zone’ for the groundhogs, which gives them an incentive to stick around,” Zarlenga said.

Routh said he could relocate all of the groundhogs, but they help the ecosystem on campus, and the students like the critters.

“I think we can all live together in harmony on campus,” he said.

Anyone interested in watching the groundhogs on campus is going to have to hurry; they go into hibernation in October and won’t reappear until March.