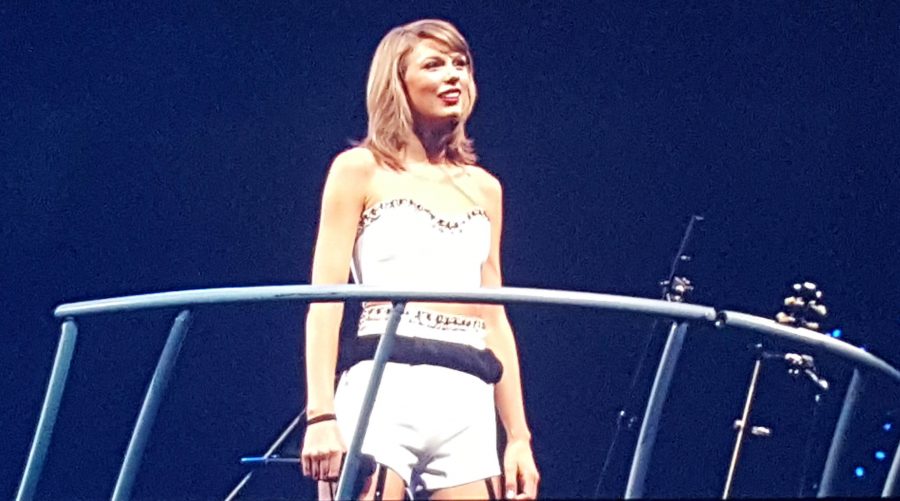 Taylor Swifts looks out to the crowd Monday night at the Scottrade Center in St. Louis. Photo by Essi Virtanen

“There is one thing you need to know about me before we get started,” pop star Taylor Swift said to the audience, “I was born in 1989.”

Swift stopped by in St. Louis with her “1989” World Tour this week and made sold-out Scottrade Center “shake it off” on Monday and Tuesday night.

The two-hour pop spectacle had it all.

The first proper 80’s rally from the album, “Welcome to New York,” got the party started, which seemed really the right and only way to do it considering the song represents her shift with this album from the country scene in Nashville to the world of Pop in New York.

The two-hour pop bliss mostly focused on the songs from her new album, which is something she has always done on her previous tours. However, she always includes glimpses of her past, this time also simultaneously adding some 80’s spice to the old sounds.

Rough guitar remixes of “I Knew You Were Trouble” and “We Are Never Ever Getting Back Together” with a dreamy electric piano remix of “Love Story” were highlights that really showed how Swift does not only have a talent for writing lyrics that strike into the hearts of people all over the world, but also to recreate those already unforgettable songs into something completely new but as powerful as the original versions.

There is no doubt that “1989” Tour is the biggest showcase of Taylor Swift’s career so far. Country boots have indeed been left behind in Nashville and high heels, dazzling cute dresses, crop tops, shorts and thigh-high boots have come into the picture.

There was a catwalk that extended from the stage that, with the fabulously sparkling outfits, screamed inspiration from Victoria’s Secret Fashion Shows, in which Swift partook in 2013 and 2014.

There is something, however, Taylor will never leave behind: her acoustic guitar.

Swift warmed the hearts of her fans by taking them back in time “when she was not wearing high heels but sneakers” and played “You Belong With Me” from her second studio album “Fearless” without any embellishments: only her and her guitar standing at the end of the rotating catwalk, this way giving the audience a glimpse of the girl she was when her career started.

What makes Swift unique as an artist is the way she treats her fans. She has meet-and-greets before every show and even during the show she is able to make a sold-out crowd at Scottrade Center feel like it is just hanging out as friends and having conversations about life, friendship and of course love, in between her songs.

One good example of such a conversational moment was her speech before her song “Clean,” about redemption.

Closer to the end of the concert, sitting behind her keyboard, which also stood as a beautiful steel sculpture, Swift thanked her fans for being there from the very start.

Following this she took the audience to emotional climax by playing an intro of her old song “Enchanted” ending with the lyric “I was enchanted to meet you” turning to the audience and flying straight into her latest single “Wildest Dreams.”

What makes this tour the most distinctive in the pop industry at the moment is the amount of surprise guests she has had during her tour.

She has brought at least one guest in every town including the latest Mick Jagger, Steven Tyler, Alison Kraus, Leona Lewis and Kelsea Ballerini who dropped by in Nashville last weekend.

It does not stop there, she has also brought on stars from outside the music industry, including former “Friends” star Lisa Kudrow singing “Smelly Cat,” Julia Roberts, Ellen DeGeneres and Cara Delevingne.

Nelly surprised the Scottrade Center audience with a performance of his latest single “The Fix” and his 2002 hit “Hot In Herre!” on Tuesday night.

The epic night of sparkles and sounds of “1989” was brought to an unfathomable conclusion with her first single from the album, “Shake It Off,” which really left the audience vibrating with excitement and feeling wonderstruck.

Inevitably, when leaving the arena, one wonders: what is she going to do next? We do not know, and one cannot be sure if Swift herself does either, but one thing is for sure: it can be anything, because she is full of surprises. The “1989” World Tour is proof of that.