Spinning wheels help students to get around campus 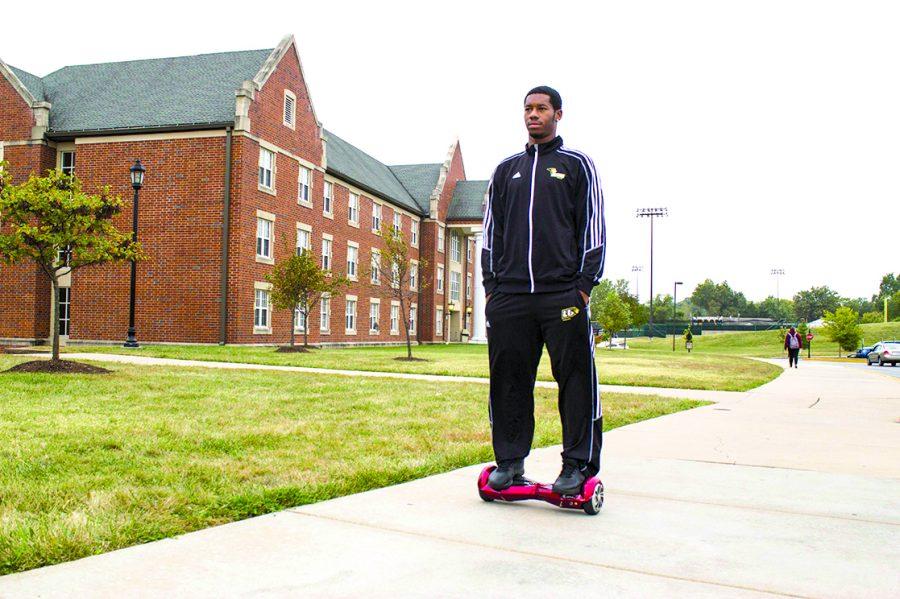 It’s Monday morning, and during the 11 a.m. rush-hour on campus, nearly every parking spot is taken.

If students run late, especially those living off campus, they might have to look for other ways to get around campus quickly and make it to their classes on time.

The two most common ones at Lindenwood are bikes and skateboards.

Sophomore Guilherme Moreira de Freitas said he rides his bike because “that way, I can go to classes much faster. For example, I work at Scheidegger and then I have class in Young. With my bike it is about two minutes, by foot maybe 10.”

A bit more practice and body control is needed for the longboard, which can best be described as a surfboard with four wheels.

It is not surprising when Valentin Merlet, a sophomore who enjoys riding his longboard, said, “I needed about six months until I was skilled enough to ride the longboard on campus, but I knew how to surf before.”

He rides the longboard because “I can just take it with me to class. I don’t need to find a place to lock it as for a bike. It is so easy.”

As he rides around the streets on campus, it’s not the cars that bother him, but more so the pedestrians.

“The cars are huge and you can estimate where they are going. But the people, they are suddenly crossing the street and then I have to sidestep.”

In contrast to these two vehicles, there is one that most people have never seen on Lindenwood’s campus before. This unique vehicle belongs to senior John Savoy.

He is riding a hands-free Segway, also known as a hover board. The user stands on the board with both feet at the same time, and only controls the vehicle by exerting pressure to one of the two sides. There aren’t any attachments for the feet, so it requires a certain grade of body control.

“It is hard to describe what it is like to stand on this, you just have to try it,” Savoy said.

For going back and forth, Savoy said he has to shift to either side. It comes without any brake, so in order to stop, he simply has to lean backwards.

Prices for this unique vehicle start at $300, but depending on the edition, Segways can cost up to $1,000.

Although the price of a Segway can be higher, it is slower compared to other vehicles, reaching 8 mph at its highest speed. “But that is enough to climb even the hill from Evans to Spellmann,” Savoy said.

However, none of these vehicles are appropriate for the winter in Missouri, and so once the seasons change, the battle to find parking spots will likely begin again.