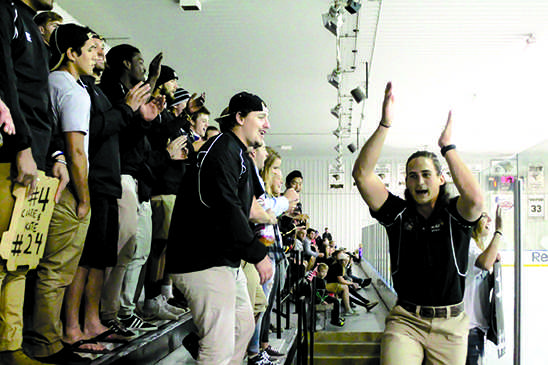 Already well-known for their intimidating physical stature and playful antics, members of the Lindenwood men’s rugby team are getting a reputation for turning out in large numbers to help cheer on their fellow Lions.

At a recent women’s ice hockey game, players jeered members of the opposing team and cheered wildly when the women tied up the game with only seconds left in the third period.

Their presence made an impact on the players and the game, women’s hockey coach Scott Spencer said.

For head rugby coach JD Stephenson, an Australian native, the catchphrase “Lions Support Lions”— is the way he runs his team. He believes that students should have a genuine level of pride in their campus.

“Everyone here is competing at the highest level,” he said, “and if we don’t appreciate each other and the school, we’re doing something wrong as an administration.”

Getting the rugby players to a game is fairly simple. Teams can issue a challenge—either verbally or through social media—towards the rugby players, and then a leader on the team will take the information and post it to the Facebook page.

Once scheduled, the team goes to the event and sits together to enhance the atmosphere and enjoy the game. Most recently, the team attended Saturday’s football game against Emporia State. Although the Lions lost 20-13, there was much support from fellow-student athletes.

Freshman Travis Heer, a California native, said that while all teammates are expected to be there, it’s a reasonable expectation: schoolwork and tests always come first.

More importantly though, the athletes want to be in attendance at the games, he said.

The rugby team, which usually draws a smaller crowd to its games, is trying to remedy that by providing spectators with sheets explaining the game.

The rugby team competes in the top Division I conference in the country, and is currently ranked fourth in the nation.