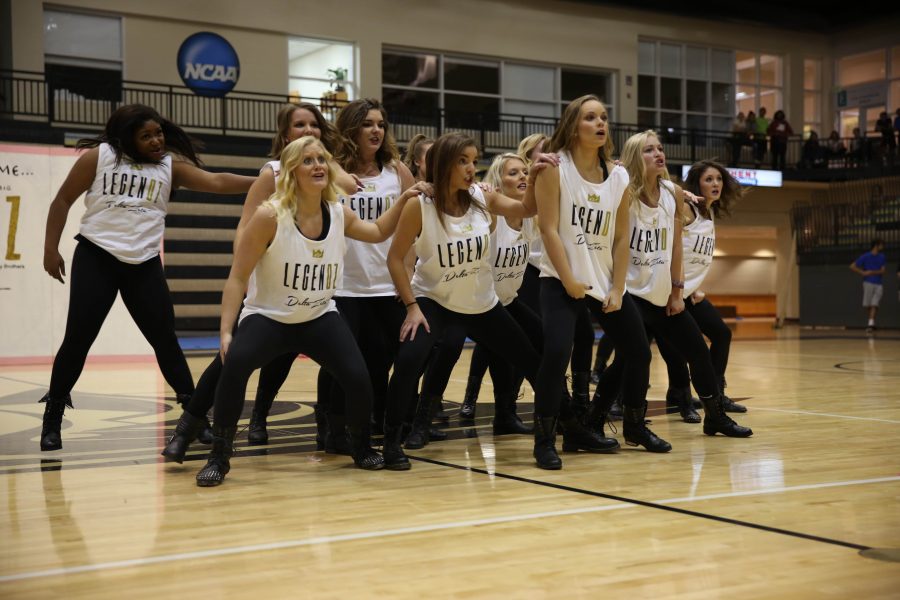 The video above shows a short segment of each group’s performance at the 2015 Lip Sync contest.
Video by Phil Brahm

A crowd of about 900 Lindenwood students, faculty and other admirers came together on Thursday to “live the legacy” and cheer on their friends and classmates as nine groups took the stage to perform at the 2015 Homecoming Lip Sync Contest.

Over the past few years, the contest has increased in popularity and has quickly become one of students’ favorite Homecoming events.

Taking place in the Hyland Arena this year, the battle showcased a variety of dance and lip sync performances that paid tribute to some of the most popular and influential musicians.

For the second consecutive year, the women of the Delta Zeta sorority won the contest, taking home the grand prize of $475. Delta Zeta vice president Courtney Loge said the women worked hard to make sure their performance was on point again.

“We practiced for about a month and this past week we went to the dance studio every day for three hours to put this show together,” Loge said.
“We are so pumped. Winning two years in a row is so awesome and we are ecstatic,” she said.

Featuring tap dancing, a constant change of outfits and different styles of music, the sorority showed enough creativity and fun on stage to win over, not only the judges, but the audience as well.

One of the highlights of Delta Zeta’s performance was its homage to the British female pop group the Spice Girls, which made the crowd cheer the most.

The women of Lindenwood’s Lion Line dance group received second place after they performed to a medley of popular hits from past decades in which they showed off their talent and passion for dancing.

The Black Student Union seemed to be one of the crowd’s favorite groups with a performance that scored them a secure third place.

Every organization was ready for this year’s battle, and their dedication and hard work did not go unnoticed by the judges, consisting of staff members Ryan Guffey, Caryn McFerren and Amy Johnson.

A special part of the event was dedicated to the pep rally that featured appearances of Lindenwood’s marching band, representatives of the fall sports teams and this year’s members of the Homecoming Court.

After the successful kick-off of this year’s Homecoming events, the Lip Sync Contest winners were already planning ahead for next year.
Loge said they are going to try for title number three next year.

“It’s just going to get bigger and better from now on, and we will definitely make this an annual tradition for our chapter,” said Loge before she hurried back to her sorority sisters to celebrate their win.

Thursday night’s Lip Sync Contest kicked off this year’s Homecoming events at Lindenwood University with big success. Spectators filled up Hyland Arena and cheered on the nine groups that battled for the title of the 2015’s Lip Sync champion.

After several impressive performances, the women of Delta Zeta took home the big prize for the second consecutive year.

Look for the upcoming issue of The Legacy, coming out this Tuesday, for the full story.