Lions use deep passing game to defeat the Lopers 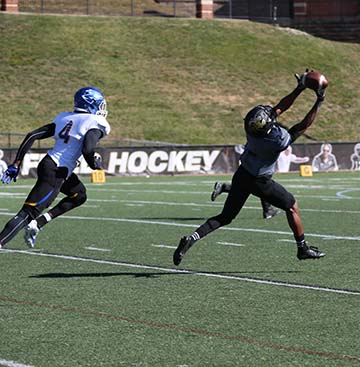 Photo by Carly Fristoe Greg Coble stretches out for a deep pass.

Quarterback Mason Bendigo threw for 335 yards and three touchdowns as the Lions defeated the University of Nebraska-Kearney 28-10 for their second win of the season.

Coming off a 69-0 loss on the road against Northwest Missouri a week ago, LU returned to Hunter Stadium this week to take on the win-less Lopers for Homecoming weekend.

From the beginning of the game, it was clear that Bendigo was on top of his game, consistently firing the ball downfield to his receivers. He began his aerial assault by finding Jaron Alexander for a 30-yard gain in the first quarter to set up the first scoring drive of the game.

The Lions would get on the board near the end of the first quarter as linebacker Connor Harris took the direct snap from the 1-yard line and drove into the end zone to put LU on top 7-0.

After allowing the Lopers to get on the scoreboard midway through the second quarter, the Lions answered right back, as Bendigo found Greg Coble for a 28-yard touchdown as LU entered halftime with a 14-7 lead.

As the second half began, Bendigo got into a groove with his receivers, finding Tre’ Roby on a 76-yard pass that put LU up 21-10 and sent the crowd into a frenzy.

The offensive assault  continued in the final quarter as Bendgo let another deep ball go, finding Coble on a 70-yard pass that iced the game with the score at 28-10.

On the defensive side of the ball, Harris was once again a standout, accumulating 18 tackles and 1.5 sacks in addition to his offensive touchdown.