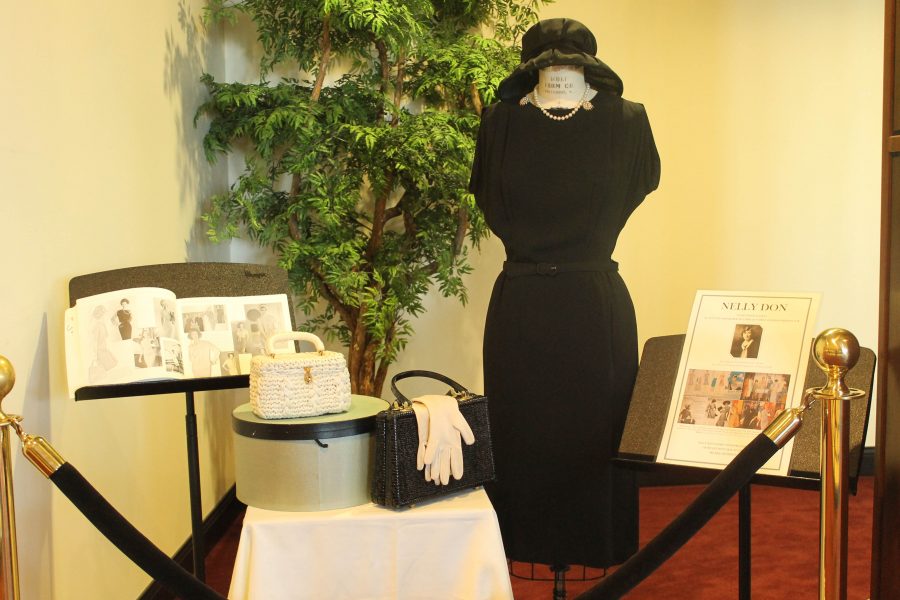 Fashionable furs, raffles, a tribute to alumna Nelly Don, and a pop-up sale raised funds for the Study Abroad Program in France at Lindenwood’s Alumni Fashion Showcase. The annual event, as part of LU’s Homecoming Week activities, took place at the J. Scheidegger Center on Friday, Oct. 16 from 4-6 p.m.

Attendees enjoyed French hors d’oeuvres as they listened to alumna and researcher Lisa Thompson discuss the work of Nelly Don.After graduating, Don became a successful business woman and fashion designer who had her own manufacturing company. She became the second female millionaire in the U.S. by the age of 29.

“She was unique. She shifted the place of the woman in the fashion industry,” Thompson said. “She is an iconic figure for the university and fashion.”

“I chose each item for its versatility,” Harrison said. “I wanted to pick the pieces that would work for all body types.”

After the showcase, the alumni exhibition started. Attendees heard the accomplishments of the participants and had the opportunity to ask questions.

“For us, it is really important that they continue following their growth so we support them with looking for a job, building resumes and different things in the process,” said Nasheli Ortiz, assistant professor of fashion design.

Jessica Meyer graduated in May with a master’s degree in Fashion Design. Currently, she is a product designer for The Children’s Factory in Union, Missouri.

“We make soft furniture,” said Meyer. “In our new line, everything is PVC free and it is eco-friendly. I was involved in choosing the color and designing the products of our new line.”

Barbara Bultman graduated in May with a bachelor’s degree in fashion design and a minor in visual arts. She has been working in her own line and won the Pins and Needles Emerging Designer competition, which is one of the biggest design competitions in the St. Louis area. She will also present her line during the St. Louis Fashion Week.

“Eventually I want to open my boutique, but I want to start selling things online,” said Bultman. “I recently did two dresses for two clients who kind of told me what they wanted, but I put my own little twist on it.”

Amara Mustafa, who graduated in May 2015, works for Pure by Jen as an assistant manager, alterations coordinator, and
monogramming expert.

Stylist Brittany Rader graduated in May 2014 and has worked in Nordstrom, and has shown her designs at several competitions including RAW, St. Louis Fashion Week and the Pins and Needles Emerging Designer competition. Rader currently works at Soft Surroundings in the Product Development and Design department. She advised students, “If you have the opportunity to learn about fabrics, do it. Also, take the internship seriously.”

Chajuana Trawick, assistant professor of fashion, said that in addition to the money raised at the event, 10 percent of purchases from the Fur and Leather Centre will help students pay for the study abroad program.