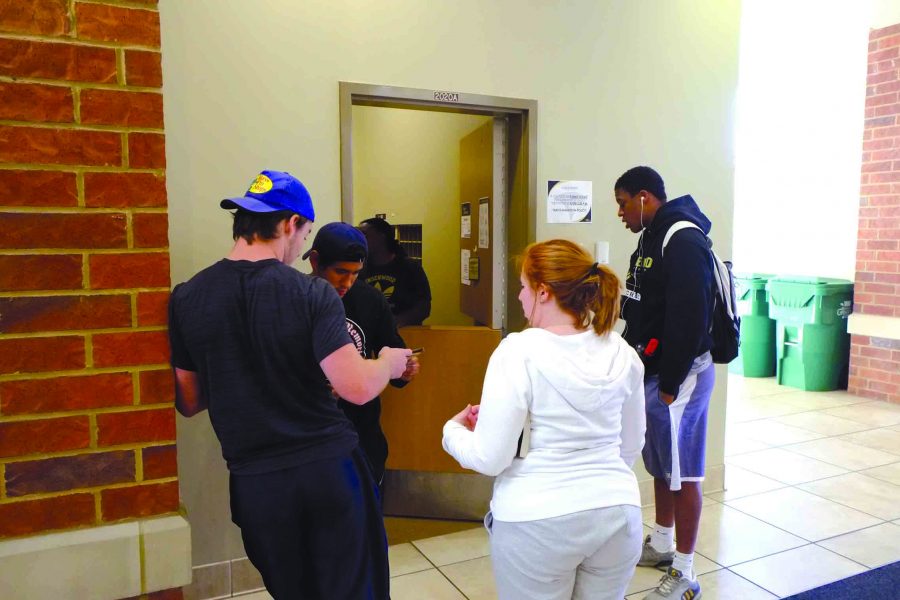 Photo by Nao Enomoto Students find things to do on their phones while they wait for their packages to be ready in the mailroom.

Included in the suggestions are the possibility of outsourcing the work to a service like the United Parcel Service, getting packages delivered to dorm rooms and allowing students to send out mail on campus, said Ryan Guffey, vice president for student development.

Administrators polled members of the LSGA about the issue, posing questions like whether mailroom workers are courteous and whether mail is delivered to the right spot or is misdirected.

Currently, the university only provides a mailbox to students who request one. Oversized mail or packages can be picked up in Evans Commons between
8:30 a.m. and 5 p.m. Monday through Friday when mailroom workers are present.

About 33,000 pieces of mail are sorted each year. Because the mailroom is such a large operation, handing over the work to professionals could require an extra service fee or reallocation of budget funds, officials said.

One recent afternoon, only a few students waited in line for mail, and they were divided about the suggested changes for package delivery.

Senior Linsey Chapa said she thinks the current mailroom operation is pretty organized, and she wouldn’t feel comfortable having packages delivered to her dorm or home unless someone was there to receive them.

“If not, then it makes easy access for anyone to just steal it,” she said. “When it’s delivered in the mail room, I get notified when the package is in, and it’s safe with the school.”

Sophomore Julia Geigle said she too had no complaints about the mailroom, but she would like the convenience of getting packages delivered to her room.

“It would save a lot of time because it’s often hard to pick up your mail with the opening times,” she said.

But students also could get emails for letter mail, something that would require a major system overhaul, Tolman said.

If the mailroom is outsourced to a company like UPS, the current Work and Learn positions may be lost, Guffey said, but those students could instead be employed by the company that takes over.

It is possible the number of jobs could even increase, he said.

Talks are in the preliminary stages, and no decision will be made on changes this semester.