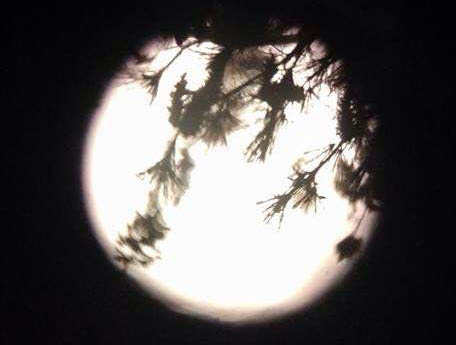 Active Minds hosted their first Star Party on the parking lot behind Evans Commons on Thursday night at 8 p.m.  The purpose of the event was to raise awareness of mental health and invite students to enjoy gazing at the night sky, while learning facts from the Astronomical Society of Eastern Missouri.

“The Latin word for moon is ‘Luna.’ That’s where the word ‘lunatic’ was taken from,” said Jaxsen Ball, co-president of Active Minds.  “People used to believe that around a full moon, people would become crazier.  Historically, there is a lot of connection between the moon and mental illness, so we thought it was a good idea to come here with telescopes.”

About 10 students appreciated images of the moon, seen through four telescopes supplied by Amy White of the Astronomical Society of Eastern Missouri and Active Minds faculty adviser Joseph Cusumano.  White has been in the astronomy field since 1985. She worked at the St. Louis Planetarium for 10 years before becoming a professor at St. Charles Community College.

“We take telescopes to schools, sometimes scout groups or people who want to see things. [The Active Minds members] were looking for volunteers and I had some free time this evening,” White said. “We´ve been looking at stars [and] constellations such as Cassiopeia, Cygnus and Taurus.”

Cusumano showed students the craters of the moon through his telescope, the Celestron 4, as well as the area where astronauts first landed in 1969. He has a passion for observing the stars, moon and galaxies and wants to share it with people.

Everyone who attended got to enjoy the start party and also have some slices of pizza. Ball commented, “It was pretty well. We never had a star part before. We got a lot of information and there’s always something mystic about looking at things like sunset, moon, stars.”