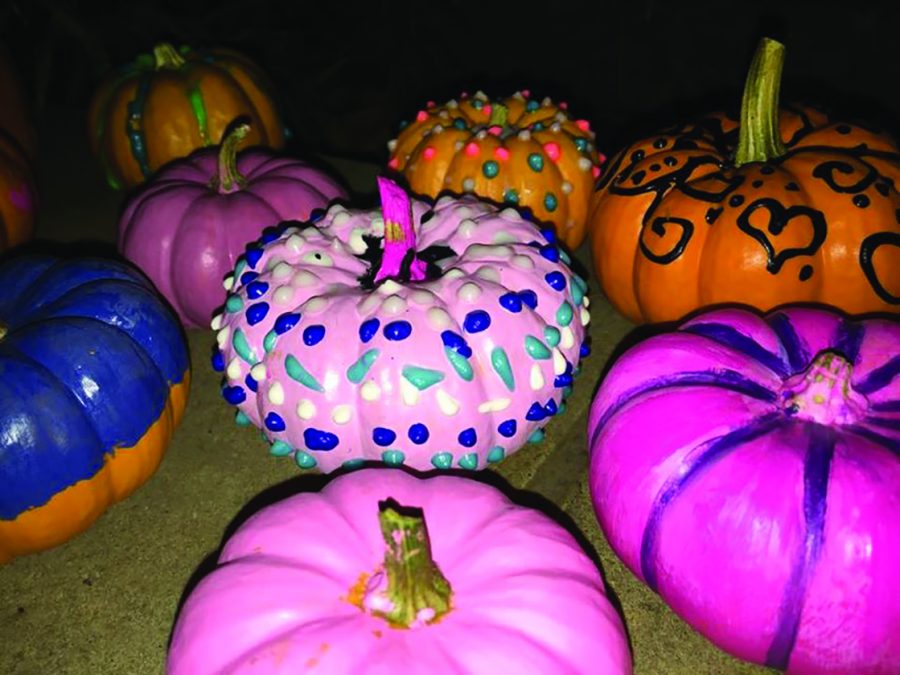 File photo by Viktoria Muench Painted pumpkins sit to dry at one of the Dark Carnival activity booths, which was hosted by Psi Chi.

Psi Chi, the international honor society in psychology, sponsored a pumpkin decoration stand next to the gazebo where people decorated their own little pumpkins. The group provided spray cans and a variety of brushes to apply either acrylic paint or glow-in-the-dark paint on the gourds.

“I think it’s really cute and fun,” said junior Edvija Jadhic. “Since everyone is different, everyone can personalize his or her pumpkin and have his own design.”

Jadhic found out about the event through her roommate, who is a member of Psi Chi and helped organize the event.

Psi Chi’s president Grace Hawley said the participation was steady throughout the event. A total of 75 pumpkins were provided, which, by the end of the night, were all painted in a variety of colors and designs.

“We thought it would be fun, and it is something for everyone, not only one target group,” said Hawley.

Students were able to have something nice and decorative for their dorm room and even something small to take home for Thanksgiving.

The society’s faculty adviser came up with the idea of the pumpkin decoration; all the required planning and pricing has been going on for a month.

“Even though it was a lot more complicated to organize, it was a nice alternative to the soccer pull, which the organization did last year at the carnival,” said Hawley. “It was a lot of improvement from last year, and we are happy with that.”