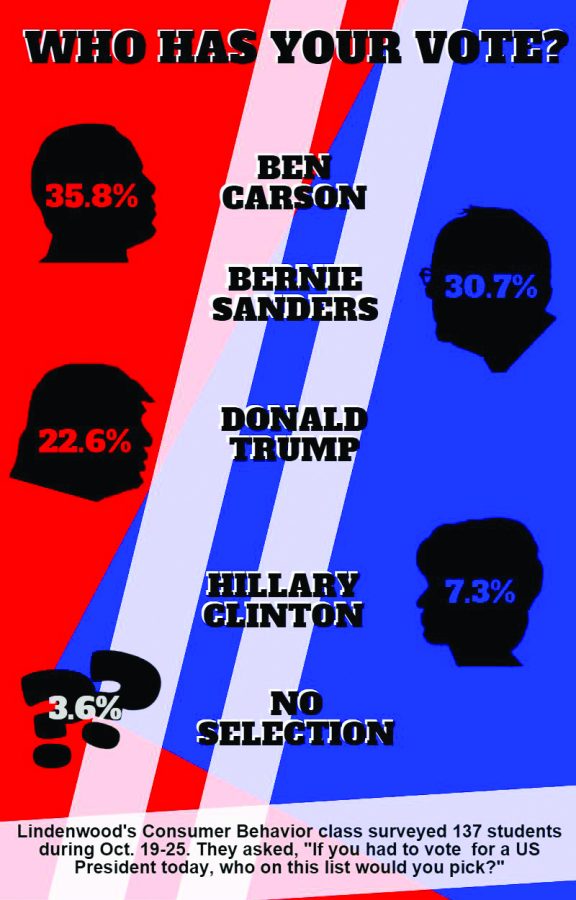 Students in a consumer behavior course recently surveyed 140 students to learn about their views of the election process.

The survey included questions to determine whether participants view-ed Missouri’s voter registration process as convenient or hindering. The survey also asked which of 19 candidates the students would vote for if they had to pick a candidate today.

“I was surprised that so many of those who were registered to vote weren’t going to,” said senior marketing student Sara Gregor, who was one of the surveyors.

Senior Austin Carlson said he was surprised by the political leanings of the people he surveyed.

“I didn’t think there were so many people who supported a Republican candidate,” Carlson said. “I was expecting college students to be more liberal.”

Asthin Bruere, another senior in the class, said she was not as surprised that Donald Trump had so many students’ support.
She said people seemed to like that Trump is a businessman rather than a partisan politician.

The survey, conducted Oct. 19-25, was part of a project for adjunct Dave Voracek’s consumer behavior class. Voracek said the course deals primarily with how and why people make purchasing decisions, but he thought voting was a timely topic.

“While most of the emphasis is about the marketing of products and services to consumers, many of the same concepts enter into how people decide what candidate to vote for, or which charity to support,” he said.

The students said they find projects like this to be beneficial for their intended field.

“It’s important to figure out how people think, so we can find the best possible outcomes and make the right decisions for our society,” Carlson said.

Bruere said the course and the instructor are among her favorites.

The instructor “really gets you engaged and finds a way to help you interact,” she said. “I get to be hands on, and I have a chance to give my opinion on our research.”