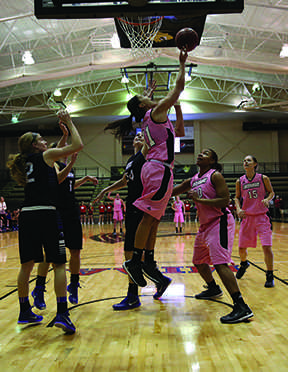 Photo by Carly Fristoe Vanessa Zailo goes up for a layup in a game last season.

Lindenwood women’s head basketball coach Tony Francis has a traditional teaching style. He believes in hard work, sweat, and most importantly, refinement. Establishing an identity that encompasses those elements has been a main focus for his team so far this year.

“We want to be the hard-nosed, toughest team and have the best team chemistry,” he said. “We want to compete with class.”

This mindset is something that Francis has instilled in his players from the get-go.

“We talk about this all the time in practice,” said junior captain Kassidy Gengenbacher.

“We want to be competitive and outplay other teams. We always say we want parents of opposing teams to say they wish they would have sent their daughter to Lindenwood.”

Francis said that since last spring, the team has been working hard to embody this image.

“We are returning 10 out of 14 girls… they set a good tone in the post season and off-season,” he said.

Fortunately for the Lions, three of the returning 10 are standouts from last season. Gengenbacher, who was named second team All-MIAA, led the team offensively averaging 18.4 points per game.

The coaching staff is also looking to senior captain Jenny Rocha and senior Vanessa Zailo to take charge on the court. Rocha averaged 4.2 assists per game and Zailo was third overall in the NCAA for rebounds.

Lindenwood ended 2014-2015 with an 11-16 record and is currently ranked ninth in the MIAA poll, but Francis said pre-season standings mean nothing to him.

“Numbers can be a dangerous things, and I don’t ever use that stuff as motvation,” he said.

Plus, that was last year.

“We had a lot of first year players last year, with freshmen, redshirts and transfers,” said sophomore Kylie Ferguson.

“This year we are more on the same page and more comfortable with each other in practice and in games.”

Because of this, Francis has switched both the offensive and defensive systems early on to accommodate a more aggressive style of play. Ferguson feels this will be their biggest asset.

“We play really hard, which is something you can’t teach,” she said.

Last weekend, the team opened their season on the road and split a pair of non-conference games with a win against Northern State and a loss to Wayne State. They will head to the University of Missouri-St. Louis on Tuesday.

“We have a little rivalry going on with UMSL,” Francis said.

“They are going to be physical, tough and well coached. It’ll definitely be a dog fight.”