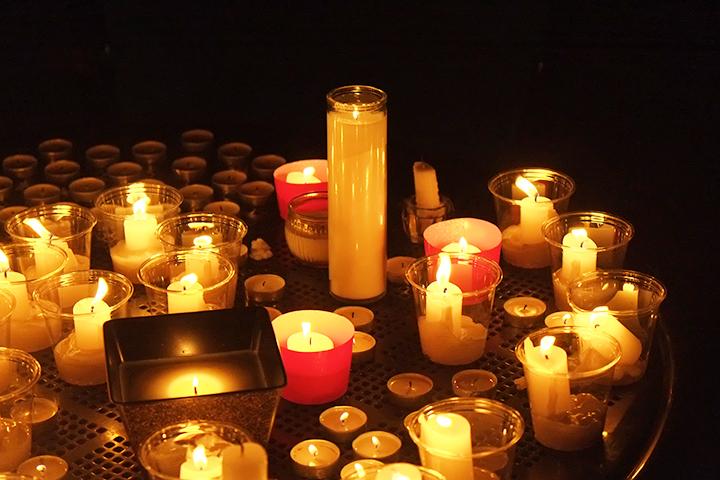 Students gathered and lit candles to remember the victims of the latest terror attacks.
Photo by Nao Enomoto

The terrorist attacks that occurred over the course of the last couple of days have left many Lindenwood students aching. Starting Thursday, the attacks took place in Beirut, Lebanon, taking the lives of 43.

On Friday more attacks were announced in Mount Hebron, West Bank, Baghdad, Iraq and the largest in Paris, France, where more than 120 lost their lives, sources state.

For many Lindenwood students, this was a time to unite. Geddy Avery, a junior at Lindenwood and fellow student, Brigita Martin, organized a candlelight vigil that took place Monday late afternoon.

“The vigil is in memory of the victims of the terrorist attacks in Paris and other places throughout the world,” Avery explained. “We needed to do something to support the victims and the international community on campus.”

Martin felt as though the event would create a safe place for the Lindenwood community. “I hope people find peace or something valuable in the event,” she said.

“I think realizing that we’re all human and that even though we have a lot of differences we also have lot of similarities and we can connect on those,” Martin said.

Teruin stated there is currently fear over Paris, and the vigil is how she can show her support. “It’s how we show we’re here for them, even if we’re far away,” said Teruin. “There are a lot of attacks going on and we’re thinking about everybody.”

The vigil consisted of a speech from Avery and French professor, Heather Brown-Hutson; the singing of the French national anthem by the French students in attendance; and the lighting of candles by those who arrived to show their support.

Avery stated, “We’re doing this because this is all we can do. We can show people that we care about each other. We support each other.”

He explained, “What’s important now is that the people here involved with this situation currently know that they have the support of this community.”

“The people who are responsible for these attacks and the murder of innocence, they’re trying to drive people apart. If we show them that we will stand together even in the face of injustice, such as they will willingly put on us, then they will have lost,” Avery said.