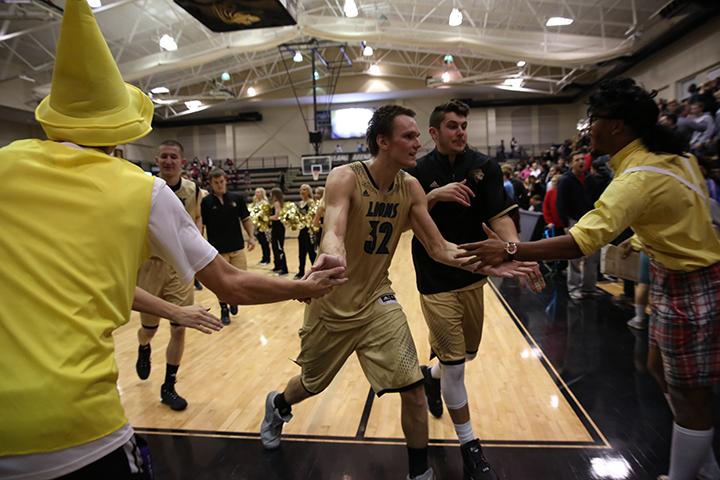 After a slow start to the 2015-16 home opener, the Lions regrouped to earn a 82-66 win in head coach Lance Randall’s first game at Hyland Arena.

Struggling to come together in the opening half of the game,  LU made just one of 12 three-point shots. Tying the game four times, the Lions finally took the lead with 9:57 to play in the 1st.

With five minutes left in the half, LU’s Sam Mader lost his footing while coming down with a defensive rebound. Hopping off the court on one leg, he went to the locker room and did not return for the remainder of the game. His status is unknown at this time.

At halftime, the Lions held a 38-30 lead over the Saints.

Capitalizing off a series of Maryville mistakes, the Lions quickly pushed their lead to 13 points, just five minutes into the second half.

Maintaining their lead for the remainder of the game, the team combined for 44 second half points and shot over 55 percent from the floor.

Despite the rough start, Randall was pleased with his team’s overall effort, especially in the second half.

“I liked their resiliency and I thought our guys had to show some true flexibility,” Randall said. “We had to play different than we have been playing so far this season.”

Remaining undefeated three games into the season, the Lions have recorded their best start since 2012. The team will travel to University of Missouri – St. Louis on Saturday, to take on the 1-2 Tritons.