Enthusiastic consent belongs in all of life, not just the bedroom 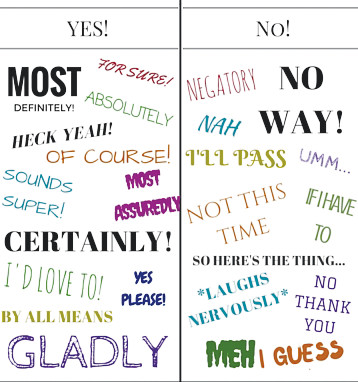 We always hear that it is not OK to force someone into having sex, and that could not be truer. Where I think the confusion comes from is focusing on sex alone. Let’s bring consent into every part of life, not just sex. Not just consent, either, but enthusiastic consent.

A huge part of our culture is made up of forcing people into doing things they would rather not do. You don’t want to go to that party? “Aww, c’mon man, I don’t wanna go alone; you’ll have a good time.” You don’t want to ride that huge roller coaster? “Just this once, you’ll love it, I’m sure.” You don’t want to try a new food that doesn’t really appeal to you? “Dude, you’ve never even tried it, just do it.”

Stop. Stop trying to force people into situations they don’t need to and don’t want to be in. Once someone has made a firm decision, do not continue to sway them.

I know this sounds sort of petty. In fact, a lot of people are persuaded to do new activities that they end up loving. My thought on that is that they were not definitive in their “no” from the beginning. They weren’t entirely sold on it themselves.

When I talk about bringing an end to this culture of pressure, I mean when the person is entirely sure he or she does not want to partake. If they want your input on why they should or shouldn’t do something, give it. If they are clearly on the fence about seeing that new scary movie then go ahead and persuade them to go with you. When they have no doubts that they do not want to see it, then stop trying to make them.

My theory is that if we bring consent into every part of our lives, not just sex, we can start to work toward a culture where “No” actually means No and our right to say it is unquestionably respected.