Students perform at first ever Lions Got Talent 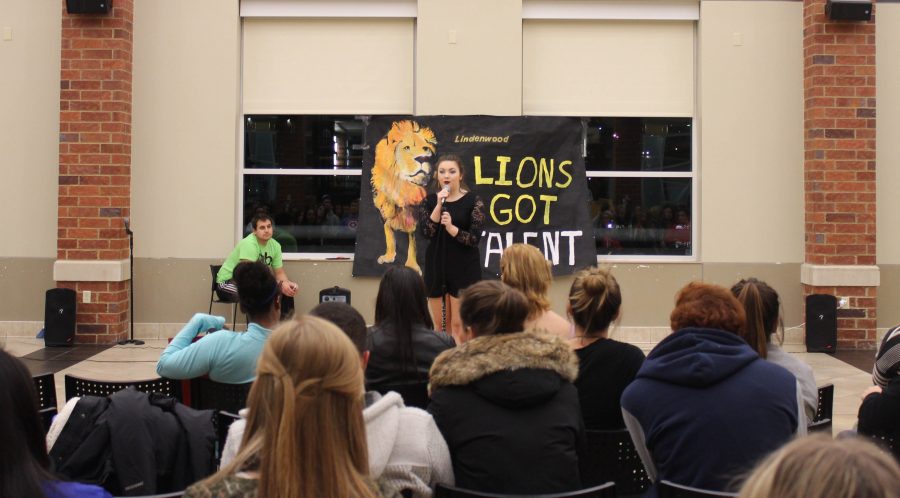 To showcase the talents of Lindenwood students, the Campus Activities Board created Lions Got Talent. The first edition of the event took place on Saturday, Nov. 21st at the Evans Commons Dining Hall.

Ethan Miller hosted the event in black high heels while five female students performed, competing to be the inaugural winner, in front of a panel of judges that included by Nikki Cornwell, Jennifer Devonshire, Christopher Miofsky. The prizes included a $150 Best Buy gift card for first place, a $75 gift card to be used at LU’s Spirit shop for second place and a basket of movies and candies for third place.

“I was trying to go for a pop star/rock look somehow,” she mentioned. “I’ve been singing since I was probably two or three.”

Abby Mrachko closed the competitive portion of the event with “Hello”, cheered on by her friends who brought banners to show their support.

Juanise Cooper followed Perez with a performance of Drake’s “Hotline Bling”, throwing in some dance moves near the end, which Cornwell praised. Her voice also go rave reviews, which Miofsky described as “beautiful.”

Angie Barlos offered a very unique rendition of Utopia’s 1977 track “Singring and the Glass Guitar”, which she performed on a synthesizer.

“I’ve been playing it for six months,” Barlos said. “I really like bands, like Rush, [that play] a lot of synthesizers and I wanted to learned it. Then my dad happened to have one and now I play it.”

Mikaela Carson maintained the emerging rock theme with “Ain’t it Fun”, by Paramore, enciting the crowd to clap to the rhythm. Both Carson and the crowd were well-received by the panel.

“I really liked the event,” said Melanie Trzebiatowski about the first ever Lions Got Talent.