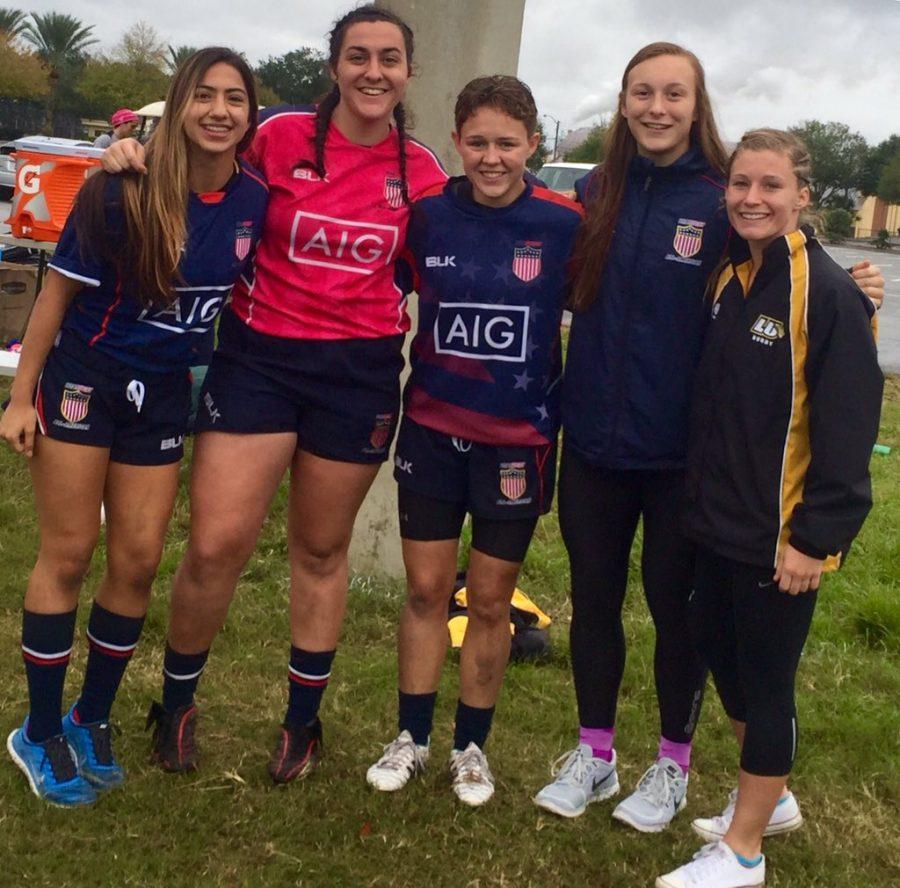 Five members from the women’s rugby team were selected to travel to Florida during the winter break to participate in the National All-Star Competition, which is a pathway to the U.S. national team.

Amanda Divich, Annakaren Pedraza, Carlene McPolin, Laura Enk and McKenzie Hawkins sacrificed a piece of their winter breaks to showcase their skills to hopefully represent the United States on the international level.

“The NASC was created by USA Rugby with the intention of identifying future national team players through a specific pathway,” said McPolin. “The camp took place in Tigertown, Florida from Dec. 28 through Jan. 3.”

Upon arrival, the athletes were divided into eight teams with three different playing groups. Two of the teams were reserved for the under-20 age group all-Americans, two teams for collegiate all-Americans and four teams for the senior athletes or post-grad athletes.

Enk, McPolin and Pedraza featured for the under 20s teams, while Divich and Hawkins represented the Collegiate All-American teams.

“The schedule was really hectic from when we arrived until we left,” said Pedraza. “We had three days to learn, train and prepare for two matches towards the end of the week.”

The first day began at 5:30 a.m., with athletes eating breakfast and seeing their athletic trainers to be taped up, ready to go for the day.

“Our coaches would tell us what we were going to be doing during practice and why we needed to learn it; it was a very hands on approach with the coach having a reason for every little thing we do,” said Pedraza.

The fourth day and seventh day of the camp teams were pitted against each other in scrimmages. According to the players they felt they did well in the scrimmages with the opportunities given.

“The team I was on, we didn’t spend as much time attacking as we would have liked to, but on defense I felt I did well,” said McPolin. “I made the tackles I needed to make. There was a girl who I was pitted against that was selected to the junior national team, and I defended her well; that was the highlight of my camp.”

Pedraza, who performed well, was able to score a try and kick a conversion in the first scrimmage but suffered a knee injury and sat out the rest of camp.

Enk, who started playing rugby only a year and a half ago, gained invaluable experience participating in her first U.S. camp.

“The coaches gave us feedback at the end of the camp,” said Enk. “They could tell I was nervous but felt that as the camp went on I began to perform better. I had some good runs and defended well.”

Hawkins, who has been in the U.S. setup since attending her first camp in 2010, viewed the camp as a great outlet to meet and train with senior side players who already represented the country internationally. As for her performance she felt she did well, but knows there’s room for improvement.

“Performance wise, I always know there is so much more to learn and do,” she said. “It’s highly motivating to continue learning more and more about how to improve myself, while working with people I barely know.”

Divich, a Florida native, did not have to travel far to attend the camp but considered it a great experience and encourages her to continue to strive to become a member of the national team.

“Putting on a jersey for the USA is my long term rugby goal,” she said. “Apart from being a wife and mother, being able to represent my entire country by playing the sport I love would be one of the most rewarding things in life.”