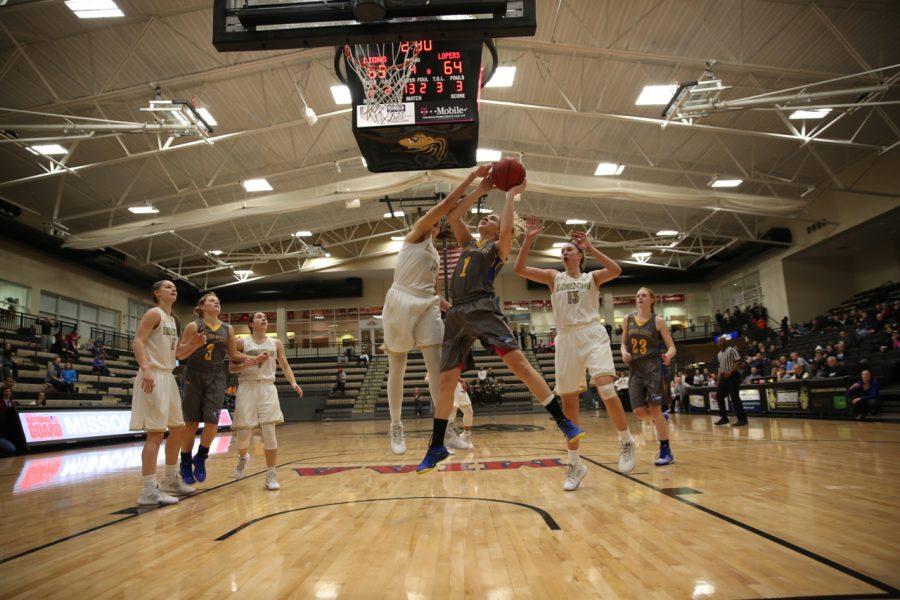 Despite staging a late rally, the Lindenwood women’s basketball team was unable to knock down key free throws at the end of the game, falling to the Nebraska-Kearney Lopers 72-67 at the Hyland Arena.

The Lions had trouble shooting in the first half, and found themselves down by double digits at times throughout the first half, before managing to get the deficit to 9 points prior to halftime, entering the locker room down 38-29.

The second half was a different story, however, as Lindenwood quickly roared back into the game, and had tied the game at 54-54 shortly after the fourth quarter began.

From there, it was a tight, back-and-forth battle, as the Lopers repeatedly tried to stretch their lead, only to see the Lions find an answer.

With under 30 seconds remaining, the Lions trailed 66-65, and Jenny Rocha hit a clutch free throw to tie the game.

Unfortunately for the Lions, that would be their last moment of glory in the game, as the Lopers managed to hit all 8 of their free throws down the stretch, while the Lions failed to consistently knock theirs down.

Despite having opportunities to tie the game in the final seconds, Kassidy Gengenbacher’s three-pointer wouldn’t fall, and the Lopers escaped with a 72-67 victory.

Turnovers played a key role for Lindenwood in the game, as they gave the ball away 22 times throughout the game, leading to numerous scoring opportunities for the Lopers.

Gengenbacher was the leading scorer for the Lions during the game, as she recorded 21 points, knocking down four three-point shots.

The Lions, now holding a record of 7-8 and a conference mark of 3-6, will get back to action on Wednesday, Jan. 13 against Central Missouri on the road at 5:30 p.m.