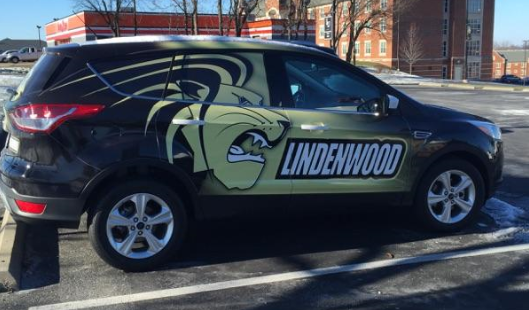 Several Ford Escapes, decorated with the familiar Leo the Lion logo, are being used to help recruit students to Lindenwood.

Dr. Joe Parisi, vice president of Enrollment Management, said Lindenwood’s admissions counselors travel all over the state, and sometimes the tri-state area, so the cars allow them to spare their personal vehicles.

The St. Charles campus owns five of the wrapped cars, and the Belleville campus has three. Two of the five St. Charles cars arrived last week; the other three are expected to arrive next week.

Parisi said the main purpose of these cars is for marketing and visibility opportunities at college fairs, high school visits, and other recruiting events. He declined to say how much the vehicles cost, but said the reactions to them have been “outstanding.”

“I drove them to show some administrators the car, and students were pointing with jaw-dropping faces like they couldn’t believe there were Lindenwood cars like that,” he said.